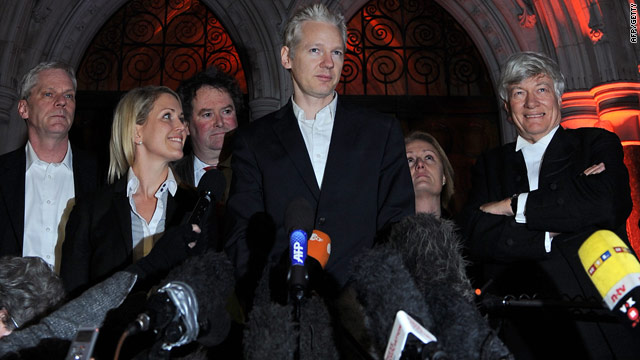 London (CNN) -- Julian Assange, the editor of WikiLeaks, walked out of London's High Court after being freed on bail Thursday, nine days after he was arrested for questioning about alleged sex crimes in Sweden.

Assange thanked the public, the media, his lawyers, and the British justice system, saying, "If justice is not always an outcome, at least it is not dead yet."

Assange, 39, handed himself over to police in London last week. He was sought because Swedish prosecutors want to question him about sex charges unrelated to WikiLeaks.

A judge granted him bail on Tuesday, but lawyers representing Sweden immediately filed an appeal, keeping Assange behind bars until the High Court judge decided on the Swedish appeal.

Assange: I am innocent

Assange's mother, Christine, said after the ruling that she could "not wait" to see him "and to hold him close."

"I had faith that the British justice system would do the right thing ... and that faith has been confirmed," she said outside the court.

Judge Duncan Ouseley said he did not regard Assange as a fugitive and there was no concrete evidence to believe he would abscond.

Assange "clearly has some desire to clear his name," the judge said, adding that if he failed to appear in court, the "charges would always be hanging over his head."

Assange has the potential to flee, Ouseley found, but said if he did so, it would "diminish him in the eyes of his supporters."

Lawyers representing Swedish prosecutors had argued that no bail conditions would be satisfactory, prompting Assange's lawyer, Geoffrey Robertson, to suggest derisively that they saw him as "some sort of Houdini character."

Vaughn Smith, who offered his mansion to satisfy court requirements that Assange have a permanent address, said the editor would be able to continue his WikiLeaks work from there.

He noted that the court had ordered Sweden to pay the cost of the appeal, "which to me suggests they shouldn't have appealed."

And he said the judge was very clear that Assange is not a fugitive.

"We're not harboring him, we're just giving him a bed," Smith said.

Smith will keep Assange "if not under house arrest, at least under mansion arrest," Robertson said at Tuesday's bail hearing.

After his arrival at Smith's Ellingham Hall in Suffolk, Assange told reporters that his "highest task" was to continue his work with WikiLeaks.

He said his arrest "confirmed to me personally that we are on the right path and has given me enough anger about the situation to last me 100 years."

"Obviously there have been serious attempts to take down the content by taking us down as an organization and taking me down as an individual," he said.

Prominent left-wing journalist John Pilger, an Assange backer, called the ruling "very good news but it should have happened a long time ago. This hearing was a waste of taxpayers' money."

And he warned about "the specter of Assange being extradited to the United States, where he could end up in a maximum security prison."

Stephens told journalists as he entered court Thursday that a number of people have offered to help pay Assange's bail, and that the money is "in the banking system." Socialite Jemima Khan and Pilger have previously offered money for his bail.

Assange is facing accusations of rape, sexual molestation and illegal use of force stemming from separate incidents in August in Stockholm. He has not been charged, but he could face two years in prison if convicted.

His lawyers deny the allegations and have vowed to fight any attempts at extradition.

The next hearing in the extradition case is scheduled for January 11.

Last week, U.S. Attorney General Eric Holder said he had authorized "significant" actions related to a criminal investigation into WikiLeaks' publication of thousands of confidential diplomatic cables, but has declined to elaborate.

Only a small fraction of the 250,000 U.S. State Department documents WikiLeaks says it has have been released, and more are being published daily.

U.S. authorities and other Western leaders say the documents' publication threatens lives and national security. WikiLeaks and its supporters say the public has a right to know what goes on behind diplomatic doors.