From Vlora Rustemi, For CNN 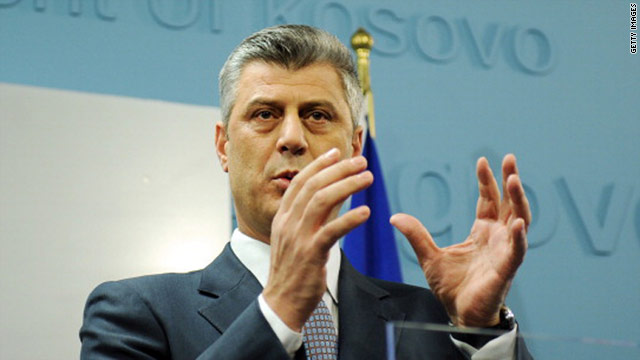 Kosovo Prime Minister Hashim Thaci talks to the media during a press conference in Pristina on December 16.
STORY HIGHLIGHTS

Pristina, Kosovo (CNN) -- Kosovo's prime minster lashed out at critics Monday over a recent report alleging that officials may have stolen organs from prisoners of war and political rivals, calling it "pure fabrication."

European authorities charged in a report released last week that executives who control the country may have stolen organs when the Kosovo Liberation Army was fighting Serbian forces in the late 1990s.

"It is a political accusation based on no facts or proof," Prime Minister Hashim Thaci said. "Therefore, it is a pure fabrication."

The report says Thaci, a former leader of the Kosovo Liberation Army, was the "boss" of a prominent faction in the militia that "apparently wrested control" of "illicit criminal enterprises" from rivals across the border in Albania.

"Numerous indications seem to confirm that ... organs were removed from some prisoners ... to be taken abroad for transplantation," read the report.

It suggested that illegal organ trafficking continued after the war ended.

And links between "criminal activity" and "certain KLA militia leaders ... has continued, albeit in other forms, until today," the report charges.

Thaci said he is looking into all legal and political possibilities to correct what he sees as the report's inaccuracies. It was not immediately clear what action he planned to take.

"It is a lie for which Dick Marty will be accountable," the prime minister said of the author of the draft report.

Nearly 1,900 people who disappeared during the conflict still have not been found, and another 500 disappeared after NATO troops arrived in June 1999, according to Marty.

The report is based partially on investigations by European Union officials and was written for the Council of Europe's Committee on Legal Affairs and Human Rights.

European Union officials in Kosovo have said that anyone with concrete evidence of war crimes or organized crime should step forward.

The Council of Europe, an organization with 47 member countries, seeks to promote democracy and human rights. The council's parliament plans to debate the report in January.

"This (report) of course is a blow (for Kosovo), but this challenge will be overcome because it has nothing in common with the truth, and the truth is that Kosovo is a story of success," Thaci said.