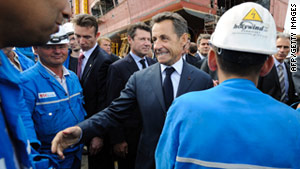 The offer came from a consortium led by two French manufacturers -- DCNS and STX -- working in conjunction with Russian shipyards.

Sarkozy and Russian President Dmitry Medvedev "welcomed the implementation of this unprecedented cooperation that will benefit the industry and employment in both countries," said a statement from Sarkozy's office. It "illustrates the willingness and ability of France and Russia develop partnerships in all major areas, including defense and security."

The deal will create 5 million hours of work for an estimated 1,000 people over four years around the French town of Saint-Nazaire, according to the statement.