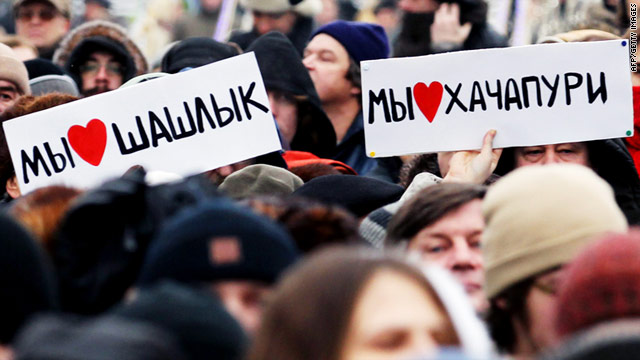 People hold posters reading 'We like kebab!' and 'We like khachapuri!' (Georgian cheese pastry) during a rally in Moscow.
STORY HIGHLIGHTS
RELATED TOPICS

(CNN) -- Hundreds of Russians hit the streets of Moscow on Sunday, rallying to promote peace and equality in response to a rash of ethnic violence and unrest, state-run media reported.

The "Moscow for Everyone" demonstration in Pushkin Square drew about 1,500 participants, according to RIA Novosti.

"People who came here do not intend to put up with the events that occurred in Moscow on December 11 and 15," said Viktor Shenderovich, one of the event's organizers. "I believe the riots in Moscow were caused by pus that burst out."

Police officers set up metal detectors around the square, checking for knives and other weapons in a bid to avoid a repeat of street violence earlier this month.

The turmoil began in southern Moscow, with the death of Yegor Sviridov, 28, a Kyrgyzstan migrant who authorities said was killed in a brawl with migrants from Russia's North Caucasus region on December 6.

Five days later, about 5,000 nationalists and "football hooligans" clashed with Moscow police as an unsanctioned nationalist-tinged mass memorial for a fellow supporter turned violent, according to state media.

The confrontations took place in Manezh Square, outside the Kremlin, and led to the arrests of 65 Spartak Moscow fans for "disobedience," Moscow police spokesman Viktor Biryukov said, according to the official Russian news agency Itar-Tass.

The head of the Spartak Moscow fan club has told RIA Novosti that the showdown had nothing to do with sports but, instead, was rooted in problems in Russian society.

Then, on December 15, police arrested more than 200 people in downtown Moscow four days later and seized weapons in a bid to prevent clashes between ethnic Russians and members of Caucasus ethnic groups, Russian news agencies reported.

Ilya Kubrakov, suspected of being the riots' ringleader, and three others were arrested December 17 for their role in Sviridov's death, a Moscow court announced, according to RIA Novosti.

Russian President Dmitry Medvedev has blamed the rash of ethnic violence on investigators who released suspects in Sviridov's death, the news agency reported. Medvedev called on authorities to take measures to punish those responsible for the crime.