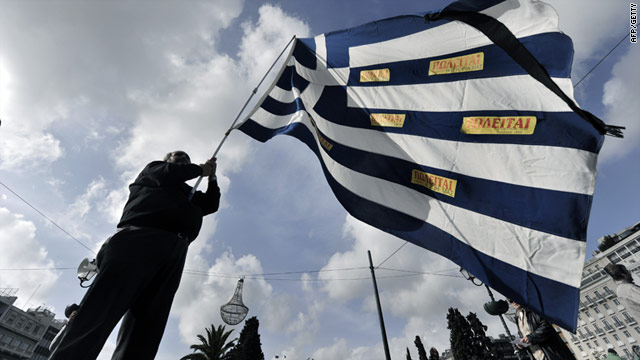 A protester waves a Greek flag in front of the parliament building in Athens in December against austerity measures.
STORY HIGHLIGHTS

Athens, Greece (CNN) -- More than 5 million Greeks did not pay income taxes for 2008, according to public documents released by the struggling nation's finance ministry.

More than six in 10 taxpayers earn less than 12,000 euros per year and are not required to pay income taxes under the Greek tax system, the press office of the Greek Ministry of Finance said Thursday.

However, there is wide speculation that many Greeks are not accurately reporting their income.

Most workers and professionals earned more than 12,000 euros in salary in 2008, according to the data provided by the Finance Ministry this month. The average salaried income was 19,234 euros for taxpayers and professionals earned 29,569 euros on average for the year. Farmers, ranchers and fisherman made 11,500 euros per year on average, but those workers only accounted for 390,000 people in the workforce.

The Finance Ministry's operations have been under scrutiny since the European Union and the International Monetary Fund agreed to bailout the struggling economy of the Mediterranean nation in May.

When asked if taxpayers are accurately representing their income bracket, the finance ministry said that "Greeks are paying the taxes assessed, though some are failing to declare all their earned income by operating in the shadow economy (e.g. by failing to issue a receipt)."

"Over the past year, the Ministry of Finance has undertaken many far-reaching initiatives to reduce tax fraud and increase compliance," which include tougher laws, improved computer systems and reorganization of the tax collections system, said Diomidis Spinellis, a general secretary with the Finance Ministry.

Finance Ministry Secretary General Dimitris Georgakopoulos told Greek press this fall that there would not be an overhaul of the Greek tax system or any new tax measures put in place.

"I don't believe that new taxes will be imposed, and more taxes cannot be imposed because then the market will be suffocated even more, beyond the difficulty today, and the result will not be the anticipated one" he said, according to Athens Times.

In May, as the EU-IMF bailout was being negotiated, the Finance Ministry released the names of more than 150 doctors in Athens being investigated for tax evasion.

Later in the month, a number of tax administration improvement measures were announced, including the replacement of directors in tax offices and the launch of an internal inquiry into cases of bribery, forged documentation, smuggling and other illegal activities.

In addition, the Finance Ministry announced that 234 of its employees were being investigated for not filing their taxes for 2007 and 2008.

During their investigation, the ministry also announced that its employees' financial records were being examined to crosscheck income statements and real estate holdings.

Greeks earning less than 12,000 euros per year are obligated to pay real estate taxes and are not completely exempt from all taxes under the system.

Citizens in the lower income bracket also contribute "to the national purse through the hefty value added tax, which is paid on all purchases of goods and services, as well as property tax on levied on purchasers and holders of real estate," the ministry's press office said.

As part of the bailout agreement with the EU and IMF, austerity measures will cut Greek pensions, except those in the lowest income bracket. The agreement, however, did not address any issues with the tax fraud investigation and how it may affect these new austerity measures.

Most of the austerity measures that are part of the bailout plan will, and have, affected the lower-income workers who do actually earn less than 12,000 euros per year, spurring many of the protests across Greece.

"The Greek context is one in which there's been a lot of tax evasion," said Mitchell Orenstein, professor of European studies at Johns Hopkins University,

"It seems to me that people who can't hide their income -- public workers, teachers -- are the ones who are going to pay the price. That's the downside of the austerity program," he added.