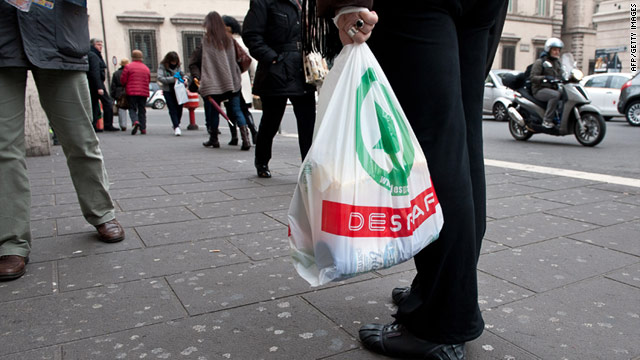 Rome (CNN) -- Italy is a nation known as much for its food as for the ubiquitous plastic bag, given out freely with every purchase around the country and often left to litter streets or landfills. A new ban coming into effect January 1, however, may change that.

The Italian Environment Ministry is banning shopkeepers from handing out plastic bags in order to help the environment. Even though the January 1 date is firm, the ministry says shopkeepers will be allowed to use up their existing stock of plastic bags without penalties.

"It is a great innovation," Environment Minister Stefania Prestigiacomo said of the ban. It "marks a step forward of fundamental importance in the fight against pollution, making us all more responsible for using and recycling. For the law to give positive results, it is necessary that all the commercial entrepreneurs, large or small, and citizens get involved and experiment with alternatives to plastic bags."

The environmental group Legambiente estimates each Italian consumes about 300 plastic bags a year, and that 180,000 tons of gasoline would be saved if everyone used just 10 bio-degradable bags a year for their shopping.

The tendency for shops and merchants to give out plastic bags for everything is a recent one. Paper bags -- or no bags at all -- were the norm just 30 or 40 years ago, when ladies would carry their own shopping carts or net sacks to the store.

Some shopkeepers interviewed Friday in central Rome complained they hadn't been told officially about the ban. A fishmonger said he learned of it only through the media and doesn't know whether he'll face a fine.

"I have no idea as to what could replace the plastic bags for me," he said. "How am I going to sell fish, which is often wet and is smelly in a paper bag?"

A grocery seller at a market said he has already started using some cloth bags with the stall's name for some of his clients, he said, adding he also learned about the ban through the media.

A woman who runs three clothing shops said there is still a lot of confusion about the ban.

"How they will go around checking?" she said. "No one has officially told me anything. I know what I know from newspapers. In one of my shops I've switched to cloth bags for over a year, but in another one I have plastic bags enough to last me until the summer. Supposedly as long as I can prove that I placed the order for those bags earlier this year, I'll be OK."

Similar bans have been enacted elsewhere around the world.

China has adopted a strict limit on them, reducing litter and eliminating the use of 40 billion bags, the World Watch Institute said, citing government estimates. Although compliance has been spotty, violation of the law carries a possible fine of 10,000 yuan ($1,463), World Watch said.

Mumbai, India, outlawed the bags in 2000 and cities in Australia, South Africa and Taiwan have imposed bans or surcharges. Ireland reported cutting use of the bags by 90 percent after imposing a fee on each one.