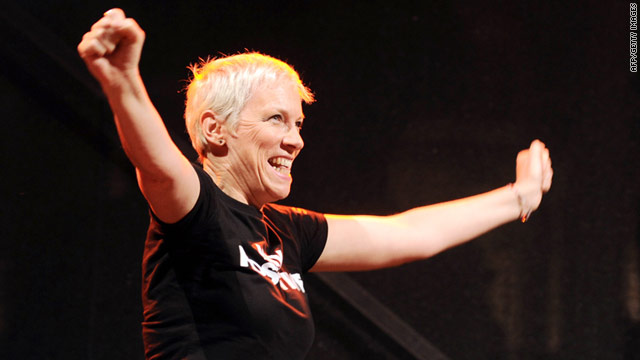 Annie Lennox was honored for her work fighting AIDS and poverty in Africa.
STORY HIGHLIGHTS

London, England (CNN) -- Singer Annie Lennox was honored by Queen Elizabeth II on Friday for her charity work, receiving an award for her role as an ambassador with Oxfam.

The former member of the Eurythmics, famous for songs such as "Sweet Dreams (Are Made of This)" and solo hits including "Walking on Broken Glass," was honored for her work fighting AIDS and poverty in Africa.

Lennox is one of 997 people on the 2011 New Year Honors List, which is released every Dec. 31 and recognizes outstanding achievement and service.

Other big names on the list include actors David Suchet, known for his portrayal of Agatha Christie's detective Hercule Poirot, and Sheila Hancock, a famous face on British stage and screen. Both received a CBE, which stands for Commander of the Order of the British Empire, the highest honor below a knight or dame.

A CBE also went to Trevor Horn, the record producer behind some of pop music's biggest hits from the 1970s to the present day. His extensive discography ranges from "Video Killed the Radio Star" by the Buggles, "Relax" by Frankie Goes to Hollywood, and Band Aid's "Do They Know it's Christmas?" to Seal's "Kiss from a Rose" and albums from Charlotte Church and John Legend.

Fashion designer Katherine Hamnett, famous for her 1980s slogan T-shirts with phrases such as "Choose Life" and "Stay Alive in 85," also received a CBE.

The co-founders of Lush Cosmetics, Margaret and Mark Constantine, received OBEs, which stands for Order of the British Empire, the next-highest honor. Their business began in a shed in their garden and has since grown to become a well known brand with more than 600 stores in 43 countries.

Far from being big names, 74% of the recipients are local heroes, honored for outstanding work in their communities.

They include a beekeeper, a driving instructor for people with special needs, an equine physiotherapist, and a woman who has coached girl's athletics for 60 years.

The bridgemaster at London's Tower Bridge, Erick Sutherns, received an MBE, or Member of the Order of the British Empire. An MBE also went to John Mackay, who has worked as a postman for 44 years in Caithness, described as one of the most challenging delivery routes in the Highlands of Scotland.

A founding member of the first gay men's soccer team in Britain also received an MBE. Aslie Pitter was recognized for making an enormous impact in tackling homophobia through sports in his role at the club.

Among those receiving the highest honor of a knighthood was Martin Broughton, chairman of British Airways, recognized as an outstanding business leader with a strong track record of service to the wider community.

Women make up 45% of the total recipients on this year's list. They will receive their awards from the queen at ceremonies scheduled throughout the coming year.