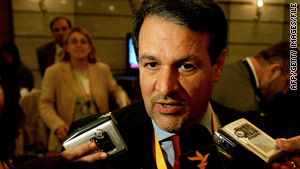 "I don't think [the] Iraqi government is willing to have any Blackwater member, even if they are working in other companies, we don't like to see them here working in any company," al-Dabbagh said. "Instructions have been given to check if there is any Blackwater member [in the country]. I advise him to leave Iraq and not to stay in Iraq anymore."

Iraq said Friday it will file suit against five Blackwater security guards cleared of manslaughter charges in the 2007 killings of 17 Iraqi civilians, an act a government official called murder. Al-Dabbagh also said Friday the Iraqi government will ask the U.S. Justice Department to appeal a federal judge's dismissal of the charges Thursday, calling it "unfair and unacceptable."

Officials are checking records in Iraq's Ministry of Interior regarding Blackwater -- which is now known as Xe -- along with its related companies, subsidiaries or any members of the company working with other companies, al-Dabbagh said. Once that checking is complete, authorities will undertake whatever action is needed, he said.

He said he had not informed the U.S. Embassy of these measures. "I don't think we need to consult any others," he said. "It is an Iraqi prevailing law and we have to practice that law in our country."

U.S. District Judge Ricardo Urbina, in dismissing the charges, ruled Thursday that prosecutors wrongly used the former Blackwater guards' own statements against them.

"Investigations carried out by specialized Iraqi authorities unequivocally found that the Blackwater guards committed murder and broke use-of-force rules when there was no threat requiring the use of force," al-Dabbagh said Friday.

The Blackwater employees were guarding a State Department convoy in western Baghdad when the shooting began. The company said its contractors came under attack, but Iraqi authorities called the gunfire unprovoked and indiscriminate.

Urbina ruled that the government's case was built largely on "statements compelled under a threat of job loss" during a State Department investigation of the shootings, violating the Fifth Amendment rights of the five men charged.

In the ruling, which followed three weeks of hearings, Urbina said the explanations offered by prosecutors and federal agents for using the guards' statements were "all too often contradictory, unbelievable and lacking in credibility."

Each of the former guards -- Paul Slough, Evan Liberty, Dustin Heard, Donald Ball and Nicholas Slatten -- faced 14 counts of manslaughter, 20 counts of attempted manslaughter and one count of using a firearm in the commission of a violent crime. Prosecutors requested charges against Slatten be dropped in November, but Thursday's ruling dismissed the counts against all five.

A sixth guard involved in the shootings, Jeremy Ridgeway, pleaded guilty in 2008 to voluntary manslaughter and attempted manslaughter.