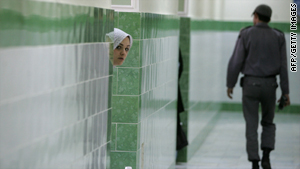 Seven Baha'i community leaders have been held at Tehran's Evin prison since their arrests in March and May 2008.
STORY HIGHLIGHTS
RELATED TOPICS

(CNN) -- A trial for seven Iranian Baha'is that has come to symbolize the persecution of followers of the faith is set to unfold next week with added controversy and global attention.

Recent turmoil and governmental crackdowns on protesters in Iran have raised concern about the fate of the seven Baha'i community leaders who have been held at Tehran's Evin prison since their arrests in March and May 2008.

And now other Baha'is, arrested during demonstrations last month on the Shiite holy day of Ashura, will also face trial in the coming days, the semi-official Fars News Agency reported Saturday.

"These people were not arrested because they were Baha'is," said Abbas Jafari-Dolatabadi, prosecutor for Iran's Public and Revolution Courts. "In searching their homes, a number of weapons and ammunition were discovered."

He said the Baha'is had "played a role in organizing the riots and sending pictures of the riots abroad. That is why they were arrested."

But a spokeswoman for the Baha'is said the government's latest allegations were designed to sow prejudice and hatred against the minority faith in Iran.

"This is nothing less than a blatant lie," said Diane Ala'i, the Baha'i International Community's representative to the United Nations in Geneva, Switzerland. "Baha'is are by the most basic principles of their faith committed to absolute nonviolence, and any charge that there might have been weapons or 'live rounds' in their homes is simply and completely unbelievable."

The U.S. Commission on International Religious Freedom has also criticized Iranian officials for blaming the Baha'is for anti-government demonstrations.

"These allegations are not only without merit, but downright fabricated," said Leonard Leo, chairman of the commission, which acts as an independent advisory board to the U.S. government.

"If the Iranian government moves forward next week with the trial of the seven Baha'i leaders, the U.S. government and international community must demand fair and transparent proceedings in accordance with international human rights standards," Leo said.

After two delays, that trial is scheduled to open Tuesday.

On Thursday, prominent Indians of the Baha'i faith held a news conference in New Delhi, urging their government to intervene.

"This trial is designed to harass and intimidate, and is one more in a long line of persecution of this community," said Maja Daruwala, director of the Commonwealth Human Rights Initiative. "Our country has a long record of pluralism and tolerance and must speak out."

The Baha'i World Centre estimates there are more than 5 million Baha'is spread around the globe; India has the largest community, with about 2 million.

The seven Iranian Baha'i leaders -- two women and five men -- are accused of spying for Israel, spreading propaganda against the Islamic republic and committing religious offenses, charges that can carry the death penalty.

Ala'i said the trial has been delayed twice because the Iranian regime has no basis for a case.

"These people are innocent, and that's a problem," she said.

She said the Islamic regime is trying to rouse public sentiment ahead of that trial by accusing Baha'is in Iran of instigating the protests that were held on December 27, the day Iranians marked Ashura.

"In general, they are blaming everybody -- the foreign media, human rights activists and now the Baha'i," Ala'i said. "It's scapegoating."

Ala'i said concerns deepened Sunday, when her organization received word from families in Iran that 13 Baha'is had been rounded up from their homes, taken to Evin prison and asked to sign documents that they would not engage in future demonstrations.

"Putting two and two together, the situation facing these Baha'i leaders is extremely ominous," Ala'i said. "We are deeply concerned for their safety."

The Baha'i faith originated in 19th century Persia, but the the constitution of today's Islamic republic does not recognize it as a religion and considers followers as apostates.

The Iranian government denies mistreating Baha'is, who number about 300,000 in Iran and are the nation's largest non-Muslim religious minority, according to Baha'i International. But the Baha'is say believers in Iran are victims of systematic discrimination and targets of violence.

Ala'i said the trial of the community leaders in Tehran has mobilized Baha'is around the world and has taken on symbolic significance -- one that could very well transcend the fate of seven men and women.