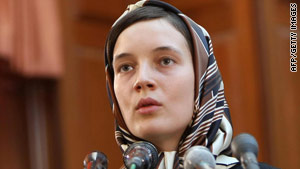 Clotilde Reiss defends herself during a hearing at a revolutionary court in Tehran on August 8.
STORY HIGHLIGHTS
RELATED TOPICS

Clotilde Reiss was present for the closed-door session at the Revolution Court, the semi-official Iranian Students News Agency (ISNA) reported, citing her attorney. It was the third and last session of her trial, which began in November.

"In this session the last defense was presented by my client and myself to the court and we are hoping that based on our arguments the court will bring in a not-guilty verdict in the next few days," defense attorney Mohammad Ali Mahdavi said, according to ISNA.

The exact charges against Reiss are not clear, but Iranian media have reported that she admitted to crimes in court, saying she participated in an illegal demonstration. Reiss asked for clemency and forgiveness, according to media reports.

Human rights groups and Iran's opposition leaders have accused the government of forcing people to make such confessions.

Reiss was among some 4,000 people arrested in connection with protests following the June 12 presidential election. Thousands of Iranians demonstrated against the official result of the vote -- the re-election of hard-line President Mahmoud Ahmadinejad.

Reiss was released from prison in August and has been staying at the French Embassy in Tehran while awaiting trial.

France has said it wants the Iranian court to confirm Reiss's innocence.