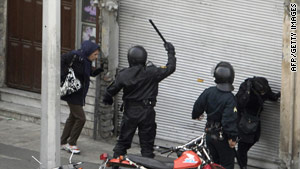 Iranian security forces were out during opposition protests in Tehran on December 27.
STORY HIGHLIGHTS
RELATED TOPICS

(CNN) -- A human rights group is calling on Iran to free protesters detained after the disputed June 12 presidential election, calling the government's crackdown on its critics a "human rights disaster."

About 4,000 people have been arrested in the post-election crackdown. The government has confirmed the deaths of at least 37 people in the protests or in detention, seven of those deaths happening in December on Ashura, a major religious observance, the report said, alleging that many detainees have been beaten, tortured and in some cases, sexually abused. The group also says it believes the death toll is much higher.

"The systematic and brutal targeting of demonstrators and government critics by security forces shows that the regime's crackdown is nothing but an attempt to silence voices of dissent," said Joe Stork, the group's deputy director for the Middle East. "Iran's post-election unrest is now a full-blown human rights crisis."

The Iranian government had no immediate response to the report.

Three prison officials have been charged with premeditated murder in the beating deaths of three detainees and a parliamentary investigation concluded earlier this month that 147 protesters arrested July 9 suffered "harsh corporal punishment, humiliating and insulting techniques," and other mistreatment. The investigation did not reveal evidence of rape or other sexual abuse.

Human Rights Watch's study of Iran's alleged abuses was part of the much larger World Report released Wednesday. In the Iran chapter, the group calls on the government to restore rights in Iran by freeing post-election protesters and investigating alleged abuses of demonstrators and detainees, and prosecuting those responsible.