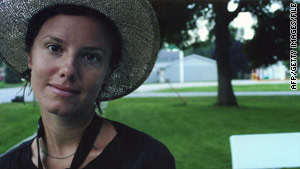 Sarah Shourd, pictured in an undated family photo, is one of three American hikers held in Iran since July
STORY HIGHLIGHTS
RELATED TOPICS

Paris, France (CNN) -- Two Belgians recently detained in Iran said they had some contact with three U.S. hikers imprisoned there and are concerned about the Americans' well-being.

In a statement Tuesday, Idesbald van den Bosch and Vincent Boon Falleur said they were visiting Iran as tourists when they were arrested and imprisoned September 5 on suspicion of espionage.

The two said they spent three months in Evin Prison, where the U.S. hikers were in solitary confinement when the Belgians were freed in December.

"Iran, please, free the hikers," they said in a statement distributed to French-speaking media in Europe.

Their words prompted the hikers' families to say they "greatly appreciate" the Belgians' support and "share their families' joy that they are home safe."

The three Americans -- Shane Bauer, Sarah Shourd and Josh Fattal -- accidentally strayed across an unmarked border from Iraq into Iran while on a hiking trip, according to their families. They are being held on espionage charges after being detained on July 31 and were to be put on trial.

"We are writing this statement because we had some contact in Evin Prison with the Americans who were hiking in Iraqi Kurdistan, Shane Bauer, Sarah Shourd and Josh Fattal. We are deeply concerned about their well-being," van den Bosch and Falleur said.

"We were detained for half as long Shane, Sarah and Josh will have spent in prison on January 31, 2010. We appeal to the Iranian authorities to act in a humanitarian fashion and not politicize their case. Our hearts go out to them and their families."

In a statement, the hikers' families said they "remain deeply concerned about Shane, Sarah and Josh and their well-being."

"On Sunday, they will have been held for six months, with no contact with their families -- not even one phone call -- and have not had access to their lawyer," the families said. "We appeal yet again to the Iranian authorities to release our loved ones and end our sorrow."

The United States strongly criticized Iran on Tuesday for holding the three American hikers, especially after the Belgians' comments.

"What that tells us is that our three American citizens are potentially in deplorable conditions," State Department spokesman P.J. Crowley told reporters.

"It is outrageous that Iran refuses to abide by international standards, international agreements in terms of treatment of those that were in their care. And we continue, we will continue to press the Iranian government so that we can see for ourselves what the conditions of our citizens are."

Van den Bosch and Falleur said they had been "interested in exploring the country's beautiful landscapes by bicycle" when their holiday "took an unexpected turn." Of the three months in prison, one was in solitary confinement, they said.

"We were freed without a trial and hope that the hikers will be freed as soon as possible. We do not know the current conditions of their detention since we left Evin Prison on December 8, 2009. At that point, they were still in solitary confinement," the two said.

In their statement, the Belgians underscored the ordeal of prison, saying, "The psychological stresses of detention were very great, especially during interrogation and solitary confinement," and adding that they "can only imagine that the pressure they [the Americans] are under to confess to crimes they are innocent of is extremely intense."

"The pressure during interrogation was psychological. In solitary confinement, we were in cells with no outside contact and a ceiling light on day and night. We could not make eye contact with some guards and other prisoners; no communication was possible with other prisoners or with our families. Everything was designed to make us feel very lonely."

The United States, which has not had diplomatic relations with Iran since 1979, has relied on Switzerland to appeal directly for the hikers' release. A Swiss diplomat has met with the Americans in their Iranian prison.

The Belgians said they identify with the hikers because "we, like they, were tourists celebrating the freedom to explore beautiful landscapes, rich cultural traditions and marvelous hospitality."

"Now more than ever, we appreciate that freedom and it should not be unnecessarily and arbitrarily denied to anyone."