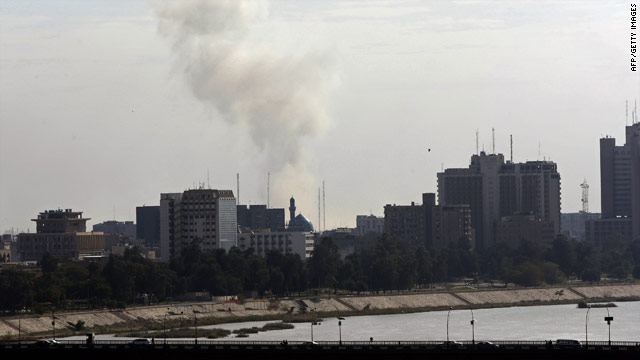 Smoke billows from the site of a car bomb attack on a government forensics office in Baghdad on Tuesday.
STORY HIGHLIGHTS

Baghdad, Iraq (CNN) -- At least 18 people have been killed and 80 injured in a car bomb blast in central Baghdad as deadly violence returned to the streets of the Iraqi capital for a second day.

The blast was caused by a suicide bomber who drove through the checkpoint, toward a government forensic office, Iraq's ministry of information said.

Tuesday's attack followed three vehicle bombings near hotels in the city on Monday which killed 36 people and wounded 71 others.

The latest bombings come amid concerns over security and fears of a fresh wave of sectarian violence between the country's rival Shia and Sunni factions as the country prepares for crucial national elections on March 7.

The buildup to that vote has been dominated by controversy over the legitimacy of hundreds of candidates banned from participating because of alleged links to former dictator Saddam Hussein's regime.

The 511-name "blacklist" issued by Iraq's Accountability and Justice Commission, which is charged with purging former members of Hussein's Baath Party from public life, includes many prominent Sunni Arab politicians.

Banning such candidates has raised fears of alienating the Sunnis -- an issue during the 2005 elections that analysts say was a contributing factor to the years of sectarian violence that followed.

In a statement issued Tuesday, the U.S. Embassy in Baghdad condemned the attacks on the hotels.

"The terrorists who committed these senseless crimes aim to sow fear among the Iraqi people. We are confident, however, that the Iraqi people will stand fast and work together to build their common future in peace and security," the embassy said.