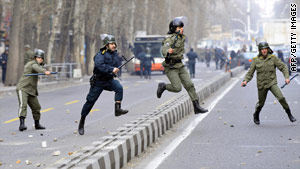 There was no immediate word on the outcome of Saturday's court appearance.

The demonstrators face charges linked to anti-government protests during the December 27 observances of Ashura, a major Shiite Muslim holy day. They are accused of plotting against the establishment, rioting and conspiring against the ruling system, and violating security regulations, according to the semi-official Iranian Students News Agency.

The Ashura clashes between security forces and anti-government demonstrators were the bloodiest since the post-election protests last summer.

The 16 also are accused of sending videos of the demonstrations to "foreign hostile networks," according to the official Islamic Republic News Agency.

Five of the defendants, including two women, are accused of "moharebeh," or defying God, a charge that could carry the death penalty, the ISNA said.

About 4,000 people have been arrested in the post-election crackdown. As of January 24, the government had confirmed the deaths of at least 37 people in the protests or in detention, seven of those deaths happening on Ashura.

On Thursday, authorities hanged Mohammed Reza Ali Zamani, 37, and Arash Rahmanipour, 20, who had been convicted of being enemies of God and plotting to topple the Islamic regime.

The two were convicted in mass trials of opposition supporters in August, but Rahmanipour's lawyer said the young man was arrested two months before the election.

In coming weeks, Iranians will hold mass rallies around the country to celebrate the 31st anniversary of "Revolution Day" on February 11, when the Islamic Republic of Iran was created.