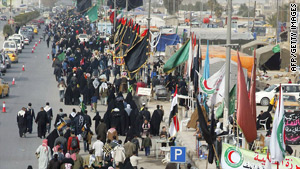 The female bomber detonated her explosive vest in the middle of a procession of pilgrims in Boob al-Sham, in a predominantly Shiite area of the Iraqi capital, according to an Interior Ministry official.

The detonation took place in a tent set up to search females, according to the Baghdad Operations Command. Three volunteer female searchers were among those killed.

The attack took place amid tight security as thousands of Shiite worshipers are making their way to the holy city of Karbala, south of Baghdad, to mark the Arbaeen -- the end of the 40-day mourning period at the close of Ashura.

Ashura commemorates the martyrdom of Hussein, the grandson of the Prophet Mohammed who was killed in battle in Karbala in 680 A.D. That event helped create the schism between Sunnis and Shiites, the two main Muslim religious movements.

There have been a number of roadside bomb and grenade attacks on pilgrims over the past few days.

Iraqi officials have warned of attacks during the pilgrimage ahead of national elections on March 7.