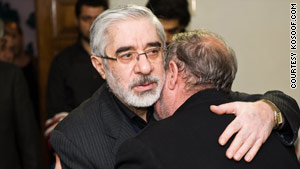 Mir-Hossein Moussavi sat down with Kaleme reporter for an interview, as we approach the anniversary of the victory of the revolution, on Bahman 22nd (February 11th).

The interview touched upon the original objectives of the revolution, the actions of the judiciary, financial mismanagement, and restrictions of freedom of the press (media), gatherings and marches as well as the agenda of the Green Movement.

Below is an overview of the interview taken from Moussavi's Kaleme.org Web site:

First of all I wish to congratulate the anniversary of the victory of the revolution to the Iranian nation, Families of the martyrs and the brave souls who fought for this land.

The evolution of the Islamic Revolution has not come to an end yet. What is of particular interest is that following the elections and subsequent actions (of the authorities), the Islamic revolution is once again being threatened with difficulties (challenges).

Some of these challenges are very useful, particularly for the new generation, in whom the essential fervor of the Green Movement is found. The true achievement of the Islamic Revolution is the struggle against a return to dictatorship and the resistance of the people on this path.

The refusal to conform to lies, cheating and corruption, which we witness today (in Iran), clearly shows the presence of this ongoing and everlasting achievement, just as the tightening choke hold on the media and press, the filling up of prisons and the merciless killings of the innocents on the streets, whose only wish is to peacefully obtain what is rightfully theirs; clearly shows the existence of the roots of oppression and dictatorship which are leftovers of the tyrannical monarchy.

Our people seek their freedom and justice and are aware that the wave of arrests and executions are carried out against the fundamental rights guaranteed by the laws and the constitution.

All that he cares about (referring to Khatami - Not former President) is to carry out executions in order to seek revenge and propagate fear. He obviously does not remember that the wave of the martyrs' blood destroyed the Shah's regime. Today though we see the same tireless spirit among the supporters of the popular Green Movement, which was present during the revolution of 1357 (1979) and the 8 years of the holy defense (Iraq/Iran war).

I still do not believe that the Islamic Revolution has achieved its goals and the ceremonies which every year commemorate the victory of the revolution are a renewal of commitments to the eradication of oppression and a renewed awareness to the core values of our revolution.

Today our people are very much present in this arena, in order to reach the god given right of self-determination and we must all remember that this Nation has given hundreds of thousands of martyrs, on this path.

Oppression in the name of the faith is the worst kind of oppression, whereas awareness and sustained struggle to revive the fundamental ideals and values of the Islamic revolution; will guide us from a dark past to a bright future.

It would have been fair and just of the Judiciary to care about the serious concerns vis-à-vis the young men it recently executed, specifically about the method of obtaining confessions from them.

As I have pointed out before; we have completely lost hope in this Judiciary, a judiciary which takes the freedom loving, faithful and honorable sons of martyrs such as the late Dr. Ayatollah Beheshti and parades them up and down the hallways of a building that is adorned with photographs of his Father! (Dr. Ayatollah Beheshti was the founder of the Islamic Republic Judicial system and a true legal as well as religious scholar).

This Judiciary has decisively distanced itself from the essential ideals of the Islamic Revolution.

Today the prisons of this Nation are filled with students, Professors, researchers and other honorable citizens whose files (legal cases) contain nothing more than pure fabrications.

They are accused of perversions, espionage and other crimes, whereas the true perverts and criminals are outside of those prisons and are busy looting the coffers of this country. Instead of catching true spies, they accuse everyone of espionage.

I see fit to defend all of my advisors and members of my trusted inner circle, all of whom have been imprisoned and been placed in the hands of these people (authorities) and I announce my embarrassment to them for not being next to them. I do not name them specifically, one by one, so as to pay equal respect to all of the political prisoners and let everyone know that Iran will safeguard and honor their sacrifices and names.

My suggestion to the security forces is to treat their own people with respect and I wish to reiterate to the supporters of the Green Movement that this has been a popular movement and it belongs to the people, to all people.

None of us must forget the final objective and that is to build a progressive, independent, free and United Iran.

I also wish to reiterate that Iran belongs to all Iranians, inside or outside the country, who wish to preserve the ancient and rich heritage and culture of this country.

The Green Movement's color was chosen because it represents the color of the Prophet and his descendants; it represents tolerance, kindness, friendship and unity.

The Green Movement respects the individuality of the human spirit, ideals, thoughts, as well as freedom of speech and expression and does not see itself as separate from other movements whose core objective is to guarantee Citizens' Rights (Civil Rights), fundamental freedoms of the Nation and social justice.

In the Green Movement, each Citizen is an independent media and we have no representatives or spokesperson outside the country. I do not blog and my personal viewpoints are published only in a handful of sites and media and are always signed.