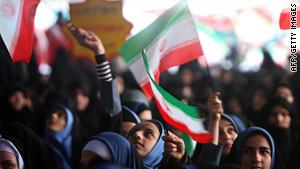 Schoolgirls mark the start of celebrations for the anniversary of the Islamic revolution.
STORY HIGHLIGHTS
RELATED TOPICS

Kaveh Ghasemi Kermanshahi was taken by seven security agents who searched his home and took personal belongings including his computer, the International Campaign for Human Rights in Iran said in a statement.

It is not clear where he is being held.

"Kermanshahi is one of the most important sources of objective human rights information and analysis in Iran, and one of the few still courageously working to document, in a scientific way, the deprivation of human rights there," said ICHRI representative Hadi Ghaemi from New York.

"Kaveh has committed no crime, and his arrest is an apparent attempt to shield the authorities from scrutiny ahead of expected protests on 11 February," he added.

That date marks the anniversary of the revolution that brought Iran's Islamic regime to power.

The Iranian regime is marking the anniversary of the Shah of Iran's overthrow with a series of events that began this week and culminate on February 11. Leading opposition figures including Mir Hossein Moussavi and Mehdi Karrubi have urged supporters to demonstrate.

The campaigners heard about Kermanshahi's arrest from Ejlal Ghawami, a spokesman for the Human Rights Organization of Kurdistan, with which Kermanshahi works.

There was no immediate independent confirmation of the arrest.

Kermanshahi, 25, is from Kermanshah in western Iran. He holds a law degree, the group said.