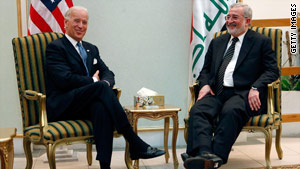 Iraq's Accountability and Justice Commission, which is charged with purging politics of mid- and senior-level members of Hussein's now-outlawed Baath Party, recently barred 511 politicians allegedly linked to the ousted regime.

While U.S. Gen. Raymond Odierno, the top U.S. military official in Iraq, said about 55 percent of the group were Shiite with alleged links to the Baathist party, the most prominent politicians on the list were Sunni Arabs. Members of that community swiftly deplored the move and even threatened an election boycott.

The decision is working its way through the Iraqi courts and parliament and could be overturned by the March 7 election. But the move greatly concerns international officials working to foster reconciliation among Iraqi ethnic and religious groups and maintain stability.

"The critical need for justice and accountability of those that have in the past been part of oppressive regimes" must be balanced with "the need for peace, reconciliation and inclusion in the democratic process," Ad Melkert, the U.N. special representative to Iraq, said this week.

After the decision, a court that heard appeals against the accountability commission from the barred candidates said the appeals will be reviewed after the March 7 elections, which would effectively allow them to run in those elections.

Then on Thursday, the Iraqi Electoral Commission asked a higher court to make a ruling on the appeal, and state TV reported that parliament speaker Ayad al-Samaraie announced a Sunday session dedicated to discussing the decision.

The issue reflects the power struggle between Sunni Arabs and Shiites.

Many Shiite politicians, blocs, and the Iraqi government are supportive of the accountability commission's move. Government spokesman Ali Dabbagh said postponing the enforcement of the ban until after the elections "is illegal and unconstitutional."

But the possible ban appeared to hit the Sunni Arab community harder because it no longer wields the power it once had.

When Iraqi leader Hussein was in power, the Sunni Arab community prevailed in Iraq, but when his regime was toppled in 2003 and a democratic system was being established, the Shiites, who represent around 60 percent of all Iraqis, rose in influence and power.

Hussein's Baath Party was declared illegal, the military was dissolved and members of the party, which was led mostly by Sunni Arabs, lost their government jobs.

As a result, the Sunni Arab community became disenfranchised, with many of them embracing the insurgency and staying away from the first elections in 2005.

The tensions spilled over into public rage for a couple of years, with pitched battles between Shiites and Sunni Arabs in the streets of Baghdad and other big cities.

Over the years, the United States has worked to get on the good side of the Sunni Arabs, bring them into the country's new political culture, and get them to accept the new Iraq.

One successful strategy was the creation of "awakening" groups -- Sunni Arab groups that countered the influence of al Qaeda in Iraq in the Sunni heartland -- a factor that led to a decrease in violence across the country.

The accountability commission's decision stoked fears that these efforts would backfire, and U.S. Vice President Joe Biden's visit to Iraq last month centered around the issue.

Iraqi President Jalal Talabani has said some of the Baath members have not been active in the party for years, and those who were not Hussein loyalists should be allowed to partake in the general election.