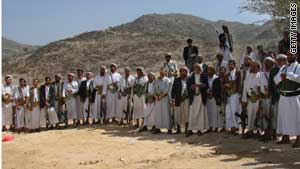 Tribal militants listen to the commander of the Yemeni army during a visit in the Saada province Saturday.
STORY HIGHLIGHTS
RELATED TOPICS

(CNN) -- Fighting between Yemen's government and rebel forces erupted Friday as the two sides were working on a peace agreement, a local journalist said.

Fighting in and around the northwestern city of Saada caused the deaths of 13 government soldiers, 19 Houthi rebels and 22 civilians, Houthi rebel sources told Hakim Al-Masmari, the editor-in-chief of the Yemen Post.

Yemen government officials did not confirm the death toll.

Even amid the fighting, the Houthis have presented the Yemeni government with a detailed peace agreement, Yemen's foreign minister told Al-Masmari on Saturday. The government is considering the proposal, he said.

The Houthis, Shiite Muslim rebels, had indicated last week that they were open to a cease-fire and to accepting the government's conditions. But the rebels demanded an end to government military operations first.

The negotiations could put an end to the conflict, which had lasted more than five years.

The conflict is believed to be both separatist, over who will have power in the area, and sectarian, whether Shiite Islam will dominate even though the majority of Yemenis are Sunni.