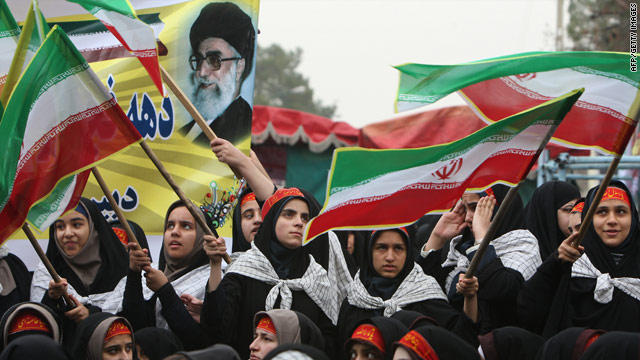 (CNN) -- Iran will this week celebrate the 31st anniversary of the Islamic Revolution -- a day that marked the end of the country's western-backed monarchy and the start of an Islamic republic.

Some experts say the revolution was also a catalyst for the spread of Islamic fundamentalism throughout the Middle East and South Asia.

This key date in Iran's history comes amid protests by the opposition after last year's disputed presidential election won by incumbent Mahmoud Ahmadinejad.

The so-called Green Movement has been protesting for social justice, freedom and democracy in demonstrations throughout the country since the June polls -- using slogans that are often identical to those heard during the 1979 Islamic revolution.

Two leading Iranian opposition leaders have called on supporters to protest on Thursday, the day of the anniversary.

The march towards revolution

The Islamic Revolution of 1979 signified the end of Iran's western-backed monarchy under Mohammad Reza Shah Pahlavi and the beginning of an Islamic republic.

The dramatic change in power was the culmination of more than a year of demonstrations against what was seen as the Shah's oppressive regime.

Video: Fears of a nuclear Iran

Despite soaring oil profits during the 1970s, Iran was plagued by crippling inflation. The Shah, who liked to show off his lavish lifestyle, was criticized for ignoring the poor and middle class. Iranians also condemned the Shah for spurning Islamic traditions in favor of modernization and stronger ties to the West.

The opposition movement was led by the Shah's nemesis, Ayatollah Khomeini. The steely-eyed religious leader, who was rarely seen smiling, was exiled from Iran in 1964 but continued to relentlessly denounce the Shah as a corrupt dictator and Washington's puppet. Audiotapes of Khomeini's fiery speeches circulated throughout Iran.

On February 1, 1979, Khomeini made his triumphant return to Iran and was greeted by crowds estimated to be in the millions. Two weeks earlier, a defeated Shah had hurriedly left the country. The military declared itself neutral and on February 11, the Islamic Revolution was official.

What made the revolution unstoppable was the assortment of groups and social classes that opposed the Shah. The revolutionary groups included communists, socialists and secularists. Not everyone wanted a theocracy, but Khomeini and his followers managed to eliminate rival factions and establish an Islamic republic.

iReport: Share your photos, video, and stories related to the unrest in Iran

It was Khomeini's version of a democracy, one that was designed to be led by representatives of the people, but all decisions and laws were to be first approved by Khomeini himself, the supreme leader, and clerics who ruled in the name of God.

Khomeini had made the controversial decision to inject religion into politics. Critics pointed to the regime's apparent contradiction. The Islamic Republic can either be a democracy or a theocracy but not both, critics said.

When Imam Khomeini blessed the 1979 takeover of the U.S. Embassy in Tehran, anti-Americanism became a pillar of the regime. Chants of death to America were a response to what revolutionaries called U.S. meddling in Iran's affairs -- most notably the 1953 coup that toppled Iran's democratically elected prime minister and Washington's support for the unpopular Shah.

Crushing dissent became another trademark of Iran's hard-line rulers. According to Amnesty International, the regime secretly executed up to 5,000 political prisoners in 1988. Morality police even patrolled the streets in a campaign against western-styled clothing.

The first significant calls for reform came in 1997 with the election of President Mohammad Khatami. The moderate cleric won 70 percent of the vote and served two terms, but his push for a freer, more open society and better relations with the West were largely blocked by Iran's conservative hardliners.

The first major public protests against the regime came in 1999, when students at Tehran University demonstrated against the closing down of several reformist papers. The government answered with a brutal crackdown and a wave of arrests.

In 2005, newly elected president Mahmoud Ahmadinejad escalated tensions with the West. In fiery speeches, the hard-line conservative raged against the U.S. and what he called western imperialism. He also drew the ire of Israeli leaders when he questioned the scale of the Holocaust.

During his first term, Iran reaped record oil profits and defiantly pressed on with what it called a peaceful nuclear program despite international concern that Tehran was keen to develop a bomb.

But Ahmadinejad's opponents criticized him for mismanaging the economy, failing to curb the high cost of living and isolating Iran from the international community.

One of Ahmadinejad's political opponents was Mir Hussein Mousavi, a former prime minister who served under the late Imam Khomeini. The two faced off in presidential elections last June. Ahmadinejad's landslide victory sparked widespread protests by the opposition Green Movement that still claims the election was rigged.

In the government crackdown that followed, dozens were killed and thousands were arrested. But almost eight months after the disputed vote, the opposition has refused to back down.