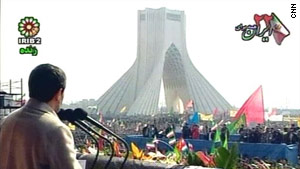 President Mahmoud Ahmadinejad speaks. Some who protested his re-election are charged as enemies of God.
STORY HIGHLIGHTS
RELATED TOPICS

(CNN) -- Iran hanged two men at the end of January -- the first political prisoners known to be executed in Iran since the demonstrations protesting the re-election of President Mahmoud Ahmadinejad, according to Amnesty International.

It's still not entirely clear what Arash Rahmanipour and Mohammad Reza Ali-Zamani's crime was. Rahmanipour's lawyer said he was already in jail on election day in June 2009, so he couldn't have been involved in the post-election uprising, she said.

But whatever their earthly crimes were, the two men executed last month were also accused of another offense far more serious than simply protesting against a government.

They were convicted of being "mohareb," enemies of God.

That is the worst possible crime in Shiite Muslim law, according to Abbas Milani, the director of Iranian studies at Stanford University.

The legal implications are clear, he said.

"A mohareb, according to Shiite law, is executed," he said.

That the regime is labeling its opponents enemies of God is a sign of how rattled it is by the protests, he said.

"They were completely caught off guard by the ferocity and extent of the opposition and they pulled out all the stops," he said.

Traditional accusations did not succeed in intimidating the protesters, he said.

"They accused them of working in cahoots with the United States and Israel. When it didn't work, they said you are mohareb," he said.

Legally, there's nowhere for the government to escalate from here, he added.

"I can't imagine them upping the legal ante," he said. "What you can do is increase the number of people they are executing in an in-your-face manner to bring terror to the people."

In fact, at least one other person is on death row for being a mohareb, according to the Tehran Judiciary as quoted by the semi-official Iran Students News Agency.

"It was not like that the beginning of the revolution. The revolution was an Islamic revolution but they did not try to give a religious aspect," he told CNN's Hala Gorani.

"Now unfortunately they are giving a very dangerous and arguably un-Iranian religious aspect to it by hating the Jews, hating the Baha'is, [using] anti-Christian propaganda, executing or even murdering some Sunni Muslim preachers," said Taheri, who fled Iran after the revolution.

The religious intolerance "is really completely new and this is one of the ugliest aspects" of the current regime, he said.

Milani said that even Ayatollah Ruhollah Khomeini, the founder of the Islamic regime, did not accuse his opponents of being enemies of God.

"In the early days of the revolution, Khomeini threatened to declare these people as mohareb, but I don't remember them ever passing a law that says if you go out and demonstrate, you are a mohareb," Milani said.

Khomeini leveled a different charge at his opponents, calling them "mofsed fel-Arz," or he who brings corruption, Milani said.

The charge was "introduced by Khomeini, and they killed thousands of people, but at that time even Khomeini was averse" to describing his opponents as mohareb, he said.

Using it now implicitly "beatifies Khomeini," Milani said. "They are making him a god."

It also could be a sign of panic on the part of the authorities, he said.

"It takes a lot of ... political insecurity to say if you don't do something I tell you to do, you are an enemy of God," he said.