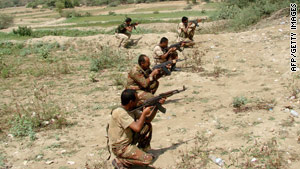 Yemeni troops take positions against rebels in the north Wednesday despite the announcement of a cease-fire.
STORY HIGHLIGHTS

(CNN) -- The Yemeni government announced Thursday an end to its military operations against rebels in the north in a long-awaited truce deal between the two.

"The Yemeni government hopes that the cease-fire will bring an end to the bloodshed, promote sustainable peace and bring reconstruction and development to the region," said Mohammed Albasha, spokesman for Yemen's embassy in the United States.

In his statement, Albasha said Houthi rebel leader Abdul Malik Al-Houthi had accepted the six conditions of the cease-fire.

Al-Houthi took to the group's Web site later and issued an order to his followers and fighters asking that they respect the cease-fire announced by the government.

The conditions, according to the statement, include clearing mines, not interfering with elected local officials, releasing civilians and military personnel, abiding by Yemeni law, returning looted items, and ending attacks within the country's northern neighbor, Saudi Arabia.

The Yemeni government hopes that the cease-fire will ... bring reconstruction and development to the region.
--Mohammed Albasha, spokesman for Yemen's embassy in the United States
RELATED TOPICS

The truce was to go into effect at midnight (4 p.m. Thursday ET), and is the latest development in a deadly back-and-forth between the government and the Shiite Muslim Houthi rebels.

The government first laid out cease-fire terms in August. The next month, the government said it would end military operations in northwestern regions if militants accepted the deal. Houthi leaders twice rejected the terms, according to government officials.

Two weeks ago, the militants indicated they were open to a cease-fire and to accepting conditions proposed by the government -- if the government ended military operations first.

But amid negotiations, violence erupted in and around the northwestern city of Saada last week. Thirteen government soldiers, 19 Houthi rebels and 22 civilians were killed, rebel sources told Hakim Al-Masmari, the editor-in-chief of the Yemen Post. Yemeni government officials did not confirm the death toll.

Even in the midst of the fighting, the Houthis presented the government with a detailed peace agreement, Yemen's foreign minister told Al-Masmari on Saturday.

The revolt by the Houthis in northern Yemen began in 2004 and has spilled over into Saudi Arabia. The conflict is believed to be both separatist -- over who will have power in the area -- and sectarian -- whether Shiite Islam will dominate, even though the majority of Yemenis are Sunni. The rebels are supporters of slain Shiite cleric Hussein al-Houthi.

Yemen's National Committee will oversee the return of displaced peoples and promote "security, solidarity and stability by renouncing violence and encouraging conflict reconciliation initiatives to prevent the occurrence of any future feuds or revenge attacks," the statement said.

Helping to end conflict with the Houthis coincides with Yemen's efforts to manage a separatist movement it faces in the south and a growing threat from al Qaeda.

When Nigerian-born Umar Farouk AbdulMutallab allegedly attempted to blow up a U.S.-bound airliner using explosives hidden in his underwear on Christmas Day, Yemen-based al Qaeda in the Arabian Peninsula claimed responsibility for the failed bombing.