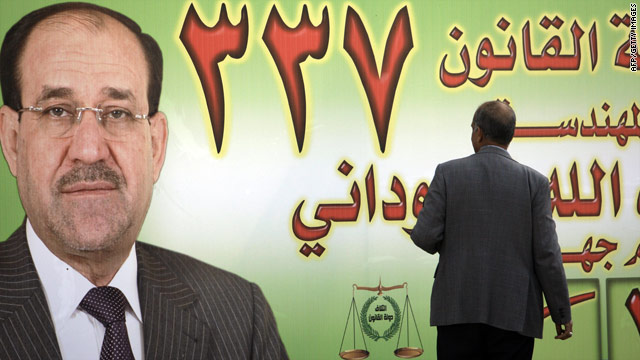 An Iraqi man looks at a poster for Prime Minister Nuri al-Maliki's coalition in Baghdad on Saturday. Elections will be March 7.
STORY HIGHLIGHTS

Baghdad, Iraq (CNN) -- A Sunni extremist leader has denounced the upcoming Iraqi national elections and warned of insurgent acts against the Shiite-led government.

Abu Omar al-Baghdadi, the commander of the Islamic State of Iraq, called the March 7 polling "a blasphemy in the doctrine of our God, and it is nothing but a political suicide and a crime in every shape and form."

The message, which surfaced on militant Web sites Friday, could not be authenticated by CNN, but it raised the specter of the growing Sunni-Shiite amity in the country unraveling.

The recording came a day after a government review panel let stand a controversial decision barring several Sunni Arab politicians from participating in next month's elections because of their past ties with the outlawed Baath Party, the Sunni-dominated movement that ruled Iraq under Saddam Hussein.

The message says the Shiites threaten the Sunni faithful, and it exhorts fighters to "gather today in every city and village to bring back the pride of their tribes and people." It also threatens the Nuri al-Maliki-led government.

The group claimed responsibility for suicide attacks in December targeting government buildings, but the message didn't specifically refer to that incident.

"But as God wished and Almighty can do whatever He wishes, yet, we promise you with what will be worse and bitter because here we are, back again, and we see the Sunni people gathering around their mujahedeen sons."

On Thursday, an Iraqi appeals panel upheld the ban of two prominent Sunni politicians, Saleh al-Mutlaq and Dhafer al-Ani, from participating in the election.

They were among several candidates banned by the country's Accountability and Justice Commission because of evidence of them "glorifying the Baath Party." The commission is charged with purging politics of mid- and senior-level members of the party, which is now outlawed.

Even though both Shiites and Sunnis faced suspensions, the incident has created a political crisis, with Sunni Arabs incensed about the move. There has been talk among them of an election boycott.

"I think democracy in Iraq has finished," al-Mutlaq told CNN, saying that he hadn't yet heard officially about the appeals panel's decision, but that if it's true, the move "is going to have some harm."

The bans -- which come ahead of the March 7 elections -- greatly concern international officials working to maintain stability and foster reconciliation among Iraqi ethnic and religious groups.