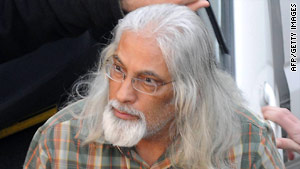 Jerusalem (CNN) -- An Israeli man accused of having 21 wives and fathering 49 children was charged Sunday in a Tel Aviv court with multiple counts of sexual assault, rape, sodomy and enslavement.

Authorities charge that he lived in a compound with the 21 wives, having convinced them that he was omnipotent.

All the wives tattooed Ratzon's name and picture on their arms and the children's names are all derivatives of his name, according to the court papers.

Ratzon married his first wife in 1972, added a second wife in the early 1980s, and from 1991 added another 19 wives, according to the indictment.

He persuaded the women that he had the power to heal and curse, through which he gained "complete control of their lives, desires, thoughts, emotions and actions," the court papers say.

Ratzon spoke in court for first time last week, saying he was innocent, that everything was done with consent, and that any women who wished to leave could do so, Israeli media reported.

The indictment charges that the defendant "captured the women in a 'pseudo-family' structure that revolved around the worship of his image, making the birth of his children a supreme goal that the women must aspire to, and all this was to glorify him while serving and fulfilling all his needs."

Ratzon demanded that his wives and children completely obey all of his orders and has stringent rules and had a penalty system if they disobeyed him, the indictment alleges.

He also "abused his wives by trampling their self-worth and cut them off from any outside social contact including their families, and by this enslaved them to him and his desires," the court papers say.

The indictment includes allegations of rape and sodomy of two of his daughters, sexual assault of another daughter, and rape, assault and sodomy of four other girls.

Beyond the mental and physical control Ratzon had over his wives, he effectively controlled all of their finances, the indictment says. The women deposited major chunks of their social security payments and salaries into the family's account, paid for all of his living expenses and bought him all his property and anything he demanded, authorities charge.

Ratzon's cult has been known to the authorities for about 10 years, they said, but it was only about six months ago they succeeded in convincing one of the women to file a complaint. That brought about his arrest last month.