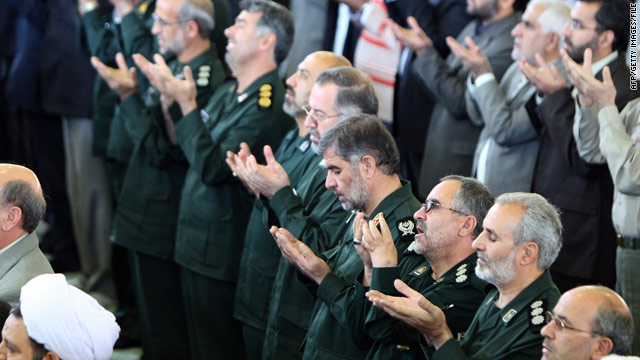 Ayatollah Ali Khamenei rejected recent remarks by U.S. Secretary of State Hillary Clinton, who just wrapped up a tour of the region.

"Once again the Americans have sent their agent to go around the Persian Gulf like a vagabond and repeat the same lies," he said, according to the semi-official Fars news agency.

"But so far no one has believed their words because America is not thinking of the interests of the region," he continued. "On the contrary, [the United States] has always trampled as far as it could on the rights of the region's countries for the sake of its own illegitimate interests."

Iran will not allow a few countries to ruin the future of the world.
--Ayatollah Ali Khamenei, quoted by the semi-official Fars news agency
RELATED TOPICS

Clinton, answering questions at the town hall meeting in Doha, Qatar, on Monday called for United Nations sanctions to pressure Iranian "enterprises controlled by the Revolutionary Guard, which we believe is, in effect, supplanting the government of Iran."

"We see that the government of Iran, the supreme leader, the president, the parliament, is being supplanted, and that Iran is moving toward a military dictatorship," Clinton said.

Khamenei struck back in comments carried by Iranian media.

"Iran will not allow a few countries to ruin the future of the world," he said, according to Iran's government-backed Press TV.

The United States and its allies believe that Iran is developing the technology to build a nuclear bomb. Iran says its nuclear program is for civilian energy and medical use.