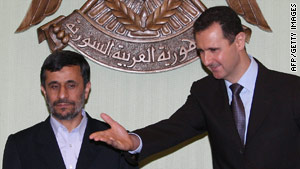 (CNN) -- Iranian President Mahmoud Ahmadinejad said Thursday that a new Middle East -- one "without Zionists and without colonialists" -- was quickly emerging as regional bonds grow stronger by the day.

The hard-line leader made the comments after a meeting with Syrian President Bashar al-Assad in Damascus on Thursday.

"The whole world should know that Iran will stand behind the Syrian nation to the end," Ahmadinejad said in remarks aired on Iran's state-run Press TV. "Regional bonds are very strong."

His comments came during a two-day visit to Damascus that follows efforts by the United States to weaken ties between Iran and Syria.

President Obama recently nominated veteran diplomat Robert Ford to be the new ambassador in Damascus, ending a five-year diplomatic hiatus there and sparking talk of a renewed relationship. But Secretary of State Hillary Clinton has tempered the thawing of relations by saying that Washington remains concerned with Syria's close ties to Iran.

"No one has enlightened her to comment on regional issues," Ahmadinejad said, slamming Clinton's statements as interfering. "The whole U.S. government has no impact whatsoever on regional relations."

Tensions between Washington and Tehran have risen over Iran's nuclear program, which Iran insists is intended for civilian use but the United States believes is intended for developing weapons.

"I find it strange how they talk about Middle East stability and at the same time talk about dividing two countries," he said.

The meeting between Assad and Ahmadinejad sparked a harsh reaction from Israeli President Shimon Peres.

"The source of the problem is Ahmadinejad's megalomania. Assad must choose what he wants -- to join the Iranian camp of evil and terror or to make peace with Israel," he said.

He called on Assad to sit down with Israel to reach a peace agreement.