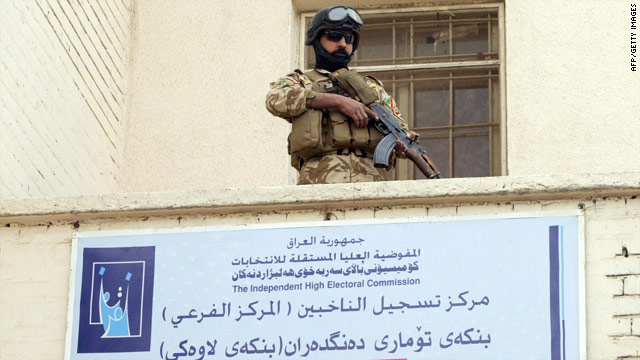 An Iraqi soldier stands guard at a polling station in Basra ahead of the March 7 general elections.
STORY HIGHLIGHTS
RELATED TOPICS

The officers will be reinstated into the new Iraqi army, said an official with the ministry of defense.

The move garnered criticism as being a political ploy and was surprising in some circles after al-Maliki's campaign rhetoric against Hussein's Baath Party.

Several candidates who planned to stand in the upcoming election have been banned by the country's Accountability and Justice Commission because of evidence of them "glorifying" the Baath Party.

"This contradicts his anti-Baathist election campaign and it is very obvious that he wants to appeal to voters."

A few weeks after the 2003 invasion of Iraq, top U.S. administrator L. Paul Bremer dissolved Baathist institutions, including the Iraqi army, that were viewed as threats against building a new Iraqi society.

The Baath Party was declared illegal and many Sunni Arabs lost their government jobs.

As a result, the Sunni Arab community became disenfranchised -- many embraced the rising insurgency and stayed away from the first elections in 2005.

The tensions led to pitched battles between Shiites and Sunni Arabs in the streets of Baghdad and other Iraqi cities.

Over the years, the United States has worked to get on the good side of the Sunni Arabs, bring them into the country's new political culture, and persuade them to accept the new Iraq.

In a separate development, a member of an al Qaeda in Iraq cell responsible for several dozen assassinations in and around Baghdad has been arrested, the U.S. military said.

Iraqi security forces seized the militant in a rural area about 38 kilometers, or almost 24 miles, southwest of the capital. The cell is believed to have conducted nearly 50 assassinations.

The arrest occurred ahead of Iraq's March 7 national elections, and the military says intelligence reports indicate that the al Qaeda in Iraq fighters "are increasingly staging politically motivated assassinations" to undermine the Iraqi government and the upcoming polls.