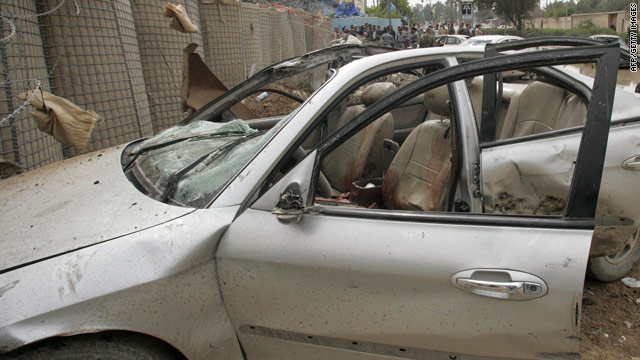 Dozens of people were killed in a triple suicide bombing in the central Iraqi city of Baquba.
STORY HIGHLIGHTS

Baghdad, Iraq (CNN) -- A suicide bomber ended a series of deadly attacks in central Iraq by detonating explosives in a hospital emergency ward where victims of two earlier blasts were being treated.

At least 29 people were killed and 42 wounded in the triple bombing attack in Baquba, northeast of the capital Baghdad.

The first car bomb attack targeted a government office near a police checkpoint. Two minutes later, a second suicide car bomb went off near the party headquarters of former Prime Minister Ibrahim al-Jaafari in central part of the city.

About an hour later, as the victims of the first two explosions were being rushed to Baquba general hospital, a third suicide bomber walked into the hospital's emergency room and detonated a bomb.

The blasts took place just four days before the country is set to hold parliamentary elections -- its second since the ouster of former President Saddam Hussein.

More than 6,000 candidates will compete for 325 seats in the Iraq parliament in the March 7 vote.

U.S. and Iraqi officials have warned of large-scale attacks in the run-up to the voting. And al Qaeda in Iraq's umbrella group, the Islamic State of Iraq, has promised to disrupt the elections.

Iraqi forces have been taking part in drills to improve their response to suicide attacks.

Baquba, the capital of Diyala province, is about 60 km (37 miles) north of Baghdad. Sunni insurgents continue to fight U.S. troops and Iraqi security forces there.