Iraqi leader willing to ask some U.S. troops to stay 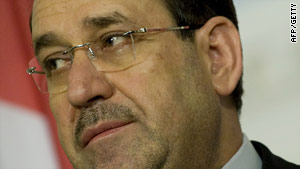 Baghdad, Iraq (CNN) -- Iraqi Prime Minister Nuri al-Maliki has left open the possibility of asking U.S. forces to stay in Iraq longer than planned, depending on the security situation and the readiness of Iraqi troops.

In an exclusive interview Thursday, CNN's Arwa Damon asked the prime minster whether he would ask the United States to extend any of its deadlines for withdrawing troops.

"This depends on the future, on whether the established Iraqi army and police would be enough or not," he said, "so this issue is depending on the developments of the circumstances, and regulated by the Strategic Framework Agreement between the United States and Iraq."

He has not previously said he would consider asking U.S. forces to extend any of their withdrawal deadlines.

"So just to clarify," Damon asked, "if the situation dictated it, you would be willing to have U.S. forces extend their stay in Iraq?"

The United States plans to withdraw all of its combat troops by the end of August, leaving 50,000 in advisory roles, and then withdraw those by the end of 2011.