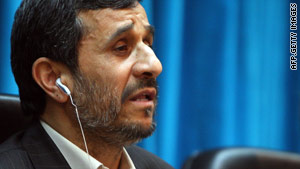 (CNN) -- Two days before his official trip to Afghanistan, Iranian President Mahmoud Ahmadinejad called the terrorist attacks of September 11, 2001, a "big lie" intended to pave the way for the invasion of a war-torn nation, according to Iranian state media.

Ahmadinejad, known for his harsh rhetoric toward the West and Israel, said the attack on U.S. soil was a "scenario and a sophisticated intelligence measure," Iran's state-run Press TV reported Saturday.

The assault was a "big lie intended to serve as a pretext for fighting terrorism and setting the grounds for sending troops to Afghanistan," Press TV reported Ahmadinejad as saying.

It's not the first time Ahmadinejad has denied a historical tragedy. In the past, he has denied the existence of the Holocaust, which claimed the lives of some 6 million Jews during World War II, and suggested Israel should be "wiped off the map."

"Today," he said Saturday, "with blessings from the Almighty, the capitalist system, founded by the Zionists, has also reached an end," Press TV quoted Ahmadinejad.

Ahmadinejad has blamed the "problems in its eastern neighbor" on foreign troops there, ILNA reported Sunday.

The one-day trip is the first for both leaders since their re-election, ILNA reported. Ahmadinejad's re-election last summer prompted thousands to take to the streets of Tehran in protest.