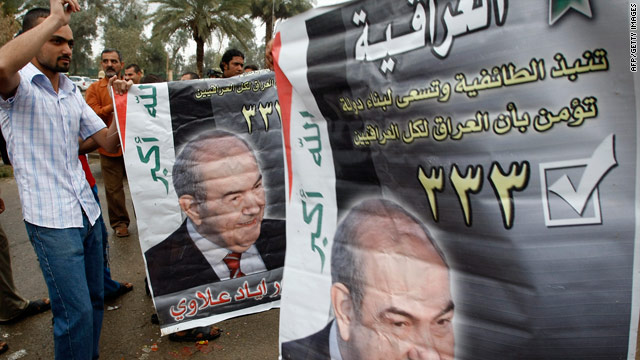 Supporters of Premier-elect Ayad Allawi carry his picture as they celebrate his party's victory in Baghdad.
STORY HIGHLIGHTS

Baghdad, Iraq (CNN) -- Ayad Allawi, the former prime minister and leader of the winning coalition in the Iraqi national election, said he's open to direct talks with all parties across the political spectrum in his efforts to swiftly forge a new Iraqi government.

Allawi's Iraqiya bloc won 91 seats in the 325-member Council of Representatives in the March 7 elections, edging ahead of Prime Minister Nuri al-Maliki's State of Law coalition, which received 89, the officials said. The Iraqi National Alliance, dominated by Shiite parties, got 70 seats and a Kurdish alliance got 43.

Al-Maliki and other candidates are displeased with the results. But while the current prime minister is talking about appealing the results of the election and asked for a manual recount, Allawi said he is open to discussions with al-Maliki and the other parties.

The constitution mandates that the biggest winning bloc be chosen to form the government. Allawi needs at least 163 seats in the parliament to forge a coalition government. The country's prime minister in 2004, Allawi is a secular Shiite whose bloc includes prominent Sunni Arab politicians, including Vice President Tariq al-Hashimi.

"There were talks with different political parties, with no exceptions, before the announcement of the results. Now, God willing, direct negotiations will start to establish the next government," Allawi said.

The electoral process has garnered praise in Iraq and across the world. Ad Melkert, special representative of the United Nations secretary-general in Iraq, called the vote a "historic achievement" and addressed the issue of poll irregularities in a statement Friday.

He said the vote count completed by Iraq's Independent High Electoral Commission represents a "solid basis for ratification by the Supreme Court."

"Whether winning or losing, participation in the elections has been a collective victory.
--Ad Melkert, United Nations
RELATED TOPICS

While there has been concern about voter fraud, Melkert said that the U.N. believes the elections have been "credible" and that any "errors and doubts" remained within "normal margins." The U.N. Assistance Mission for Iraq has provided advice and support to Iraqi election officials.

"No election in the world is perfect. There were imperfections and at some places serious issues. We condemn acts of intimidation that have occurred in the course of the process. Overall, we are confident that the system of counting contained the necessary checks and balances to ensure that the result is representative for the will of the voters."

"All results of almost 50,000 voting stations have been checked at least eight times. On the basis of specific complaints submitted by different entities, specific audits have been held on places with indications of irregularities.

Ballot boxes that could not stand the test have not been included in the count. We have not found evidence of systematic failure or fraud of widespread nature," Melkert said.

The U.N. is urging all candidates and entities to accept the results. "Whether winning or losing, participation in the elections has been a collective victory," Melkert's statement said.