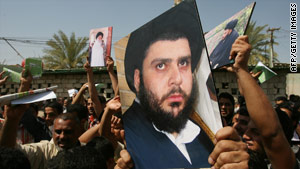 Baghdad, Iraq (CNN) -- Former Iraqi Prime Minister Ibrahim al-Jaafari has won a non-binding vote that could influence the decision on who will be the country's next prime minister, an official in the office of radical Shiite cleric Muqtada al-Sadr said Wednesday.

Tens of thousands took part in the vote last week in tents set up on the streets of Baghdad and some some southern provinces.

The vote was called by al-Sadr, who has refused to back the top vote-getters in the March 7 election and wanted his followers to designate a prime minister of their choosing.

The results play no official role in deciding who governs Iraq, but it means al-Jaafari will be the person that the al-Sadr bloc is committed to supporting as the next prime minister.

Allawi's Iraqiya bloc won 91 seats, a razor-thin victory over al-Maliki's State of the Law coalition, which gained 89 seats, according to the provisional results.

At least 163 seats are needed to form a government. As a result of being at the top of the balloting, both Allawi and al-Maliki are working to form coalition governments and are reaching out to entities like al-Sadr's group.

Al-Sadr's party, which gained at least 39 seats in the voting, is a member of the Iraqi National Alliance, the Shiite bloc that received 70 seats.