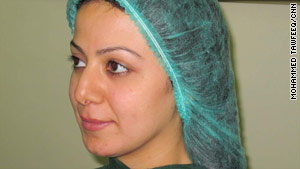 Baghdad, Iraq (CNN) -- Beauty salons are popping up on the scarred streets of Iraq's capital and as the violence recedes, more people are looking for cosmetic surgery to give them a lift.

Noor Aziz, 26, never much cared for her nose. "When I'm quiet I don't have a problem with my face," she says, "but when I smile, I feel like my face isn't pretty - so that's how I decided."

At 15, she got her first nose job -- one she believes was botched. So she's going under the knife again. To her, it's nothing out of the ordinary even for an Iraqi.

"The internet, video clips, television - we see that those who get surgeries done, they look prettier," insists Noor, "and that encourages us and gives us an incentive to get cosmetic surgery."

An increasing number of Iraqis are electing to undergo cosmetic surgery for one simple reason -- because they can.

And at a time when so much talk is about the changing face of Iraq, it's becoming clear that some here are taking that phrase literally.

Dr. Zakaria Mahmood used to work primarily on the war wounded. As a surgeon, he became accustomed to performing one reconstructive surgery after another -- a testament to the seemingly unending chain of wars Iraq participated in.

He said: "For the last 20 years, and maybe a bit more, everybody knows that Iraq was involved in many wars, and ... there's a big load of reconstructive surgery. We have to treat patients, injured patients, due to war injuries, blasts and everything, whether it was on the frontlines or inside cities."

Now, overall violence is down, but Zakaria has never been busier. Each month he gets more patients seeking cosmetic surgery. He believes he knows why.

"I think because they are watching TV too much. Now the international satellites have brought a culture, a new culture to our society," he said.

But it's not just television programs. In Baghdad, a city still pockmarked by years of war, more and more billboards have appeared promising beautification procedures for normal Iraqis. The signs are inspiring to some, disturbing to others.

Women's rights activist Yanar Mohammed says that while these types of procedures are still too expensive for most citizens, it's a worrying trend, especially for Iraqi women.

"In a society where you are bombarded by images from the media that you need to look like a model, your nose needs to be small and your eyebrows do not look good, you need to replace them by synthetic eyebrows and your lips are not big enough - you cannot live in peace with yourself as a woman," explained Mohammed.

Still, beauty salons are more popular than ever. At Ahmad Adham Beauty Center in Baghdad, the owner says business has never been better. And his clients, mostly women, are happy to spend their hard earned money to make themselves look pretty.

Nada comes in regularly to get her hair done.

"You know, the Iraqi woman has to take care of herself," she said. "She's known throughout the Arab world and throughout the rest of the world for her style, for her look, for her design."

And Nada, like Noor, doesn't have to go far for inspiration.

"We search the internet and watch the satellite channels," says Nada, "always looking for something special."