Ahmadinejad: Iran too 'mighty' to attack 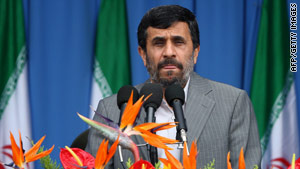 Iranian President Mahmoud Ahmadinejad speaks at an army parade in Tehran on Sunday.

Tehran, Iran (CNN) -- Iran is so powerful today that no country would dare attack it, President Mahmoud Ahmadinejad said Sunday during an annual army parade.

"Iran's army is so mighty today that no enemy can have a foul thought of invading Iran's territory," the Iranian leader said, according to state media.

"Of course, Iran is a friend and brother of regional and independent nations and it wants peace, progress and security for all countries," Ahmadinejad said.

During the event near the mausoleum of the late Ayatollah Ruhollah Khomeini -- who ushered the Islamic Revolution into Iran more than 30 years ago -- several models of Iran's medium- and long-range missiles, including the Shahab 3, were on display.

Ahmadinejad has amped up his rhetoric against the West after not receiving an invitation to the nuclear summit hosted in Washington last week. On Saturday, the Iranian president had a few choice words for the United States at Tehran's own nuclear conference.

The hardline leader slammed Western powers for what he called hypocritical and dangerous policies that can only lead to nuclear proliferation, according to remarks broadcast on state-run Press TV. He said the United Nations and the International Atomic Energy Agency were ineffective because they were dominated by a few nations.

"The Security Council has openly turned into a tool for the implementation of the policies of a few bullying nations," Ahmadinejad said. "This group should act in a way where all independent countries and governments could have a say and a role in running the affairs of that group," he said.

President Obama has been pressing the U.N. Security Council to slap Iran with tougher sanctions for its nuclear ambitions. Iran says that its nuclear program is intended for civilian purposes.

Ahmadinejad said he sent a letter to Obama earlier this week, telling his American counterpart that Iran was his only chance at success, the Islamic Republic News Agency reported.

The United States and its allies should abandon policies designed to dominate the oil-rich nations of the Middle East, Ahmadinejad said, adding that reliance on arms was a sign of a country without culture.

Iran, he said, is prepared to do all it can to counter nuclear weapons.

"One of the greatest treasons by those that monopolize nuclear weapons is to equalize nukes with nuclear energy," Ahmadinejad said. "The way to produce weapons is totally different than nuclear energy. And they know these very well, but they plan to talk about both these things in their own monopolized way. "