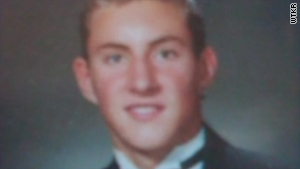 Petty Officer Jonathan Keefe was one of three Navy SEALs accused in the alleged beating of an Iraqi detainee.
STORY HIGHLIGHTS
RELATED TOPICS

Baghdad, Iraq (CNN) -- A military judge Friday found Petty Officer Jonathan Keefe, one of three Navy SEALs accused in the alleged beating an Iraqi detainee, not guilty, a military spokesman said. Keefe was accused of dereliction of duty for not preventing abuse of a prisoner.

The verdict comes a day after another of the other accused sailors, U.S. Navy Petty Officer 1st Class Julio Huertas, was found not guilty of dereliction of duty. Huertas was also charged with impeding an investigation by attempting to influence the testimony of another sailor.

Keefe had declined a jury and was found not guilty by a military judge, according to the military spokesman, Terry Conder, Public Affairs Officer for Joint Forces Special Operations Component Command.

Huertas was found not guilty Thursday by a military jury.

Abed is thought by U.S. authorities to be the mastermind in the slayings and mutilation of four U.S. contractors in Falluja, Iraq, in 2004, one of the war's most notorious crimes against Americans.

Last January, a military judge ruled that the trials of Keefe and Huertas be held on a base in Iraq.

McCabe, who is charged with assault, will be tried May 3 in Norfolk, Virginia.