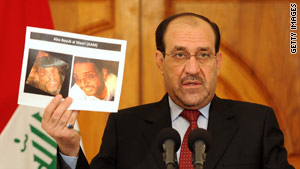 Baghdad, Iraq (CNN) -- Al Qaeda in Iraq has confirmed in a statement posted online that two of its two most senior leaders have been killed.

The two men were killed in a joint Iraqi-U.S. operation in a strike on April 18 near Tikrit, U.S. officials said.

"We find it quite difficult that we are announcing the news of the loss of the Islamic nation once again. The loss of two great Jihadi leaders who are known for their heroism on the path of struggle," said the statement signed by Abu Al-Walid Abdel Wahab Al-Mashadani, the minister of the Religious Committees in the Islamic State of Iraq.

The U.S. military has said the deaths dealt a "potentially devastating blow" to the terrorist group.

"The death of these terrorists is potentially the most significant blow to al Qaeda in Iraq since the beginning of the insurgency," the commander of U.S. Forces-Iraq, Gen. Raymond Odierno, said in a news release last week.

In an interview with CNN, Odierno said it would be "very difficult" for the al Qaeda network to replace the two men.

"The death of these terrorists is potentially the most significant blow to al Qaeda in Iraq since the beginning of the insurgency.
--Gen. Raymond Odierno
RELATED TOPICS

Al-Masri, a native of Egypt, was military leader of al Qaeda in Iraq.

Al-Baghdadi was leader of the Islamic State of Iraq, an umbrella group that includes al Qaeda in Iraq.

The U.S. military said al-Baghdadi held the title "Prince of the Faithful."

Odierno said al-Masri was the link in Iraq to Osama bin Laden and al Qaeda -- "that was the foreign element of al Qaeda that was established here."

Al-Masri became the head of al Qaeda in Iraq in 2006 after Abu Musab al-Zarqawi was killed in a U.S. attack.

Al-Masri's assistant and al-Baghdadi's son, who also were involved in terrorist activities, were killed as well, the U.S. military said.

A U.S. soldier was killed during the assault when a U.S. helicopter crashed, the military said in the news release.

The two men were hiding in a hole within a house, where their bodies were eventually found by security forces, he said.

The arrests of other senior leaders of al Qaeda in Iraq in the past couple of days led authorities to discover the safe house, al-Maliki said.