Thousands in Lebanon march for secularism 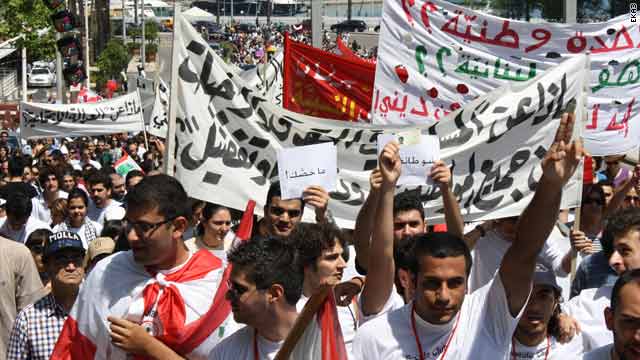 March organizer Kinda Hassan said the goal is to create a face for a secular Lebanon.
STORY HIGHLIGHTS
RELATED TOPICS

(CNN) -- Thousands of Lebanese took to the streets Sunday to call for an end to the country's deep-rooted sectarian system.

Civic rights in Lebanon currently function under a multiconfessional system where power is distributed proportionally among religious communities and leaders within those groups determine rights rather than the government.

Issues arise under this system, where government seats are allocated by religious affiliation and marriage decisions are dealt with primarily in confessional courts.

The Lebanese Laique Pride -- the group behind the march -- began as a discussion thread on sectarianism on the social networking site, Facebook.

Three months later, the discussion led to the creation of Sunday's march that now has more than 7,000 confirmed attendees.