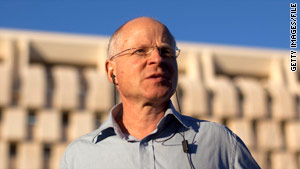 Noam Shalit takes part in a demonstration in Jerusalem in December calling for the release of his son, Gilad.

(CNN) -- In a move aimed at increasing pressure on Israel to agree to a prisoner exchange in return for the freedom of captured Israeli soldier Gilad Shalit, Hamas on Sunday released an animated video showing a character depicting Shalit's father aging as Israeli leaders vow his son's return.

In the video, posted on the al-Qassam website, the Noam Shalit figure is seen walking the streets of Tel Aviv, Israel, carrying a picture of his son and looking at billboards and street banners that show former Israeli Prime Minister Ehud Olmert and current Prime Minister Benjamin Netanyahu promising the release of Shalit. The solder has been held by Palestinian militants since he was captured in a raid in June 2006.

The video features audio from Gilad Shalit released a couple of months ago, telling his family he misses them and saying the lack of interest by the government and the army in his case is "regrettable." Shalit says he hopes the government under Netanyahu will not waste their opportunity "to reach an exchange agreement, for the result of which I can achieve a long-awaited dream for my release."

As Noam Shalit walks in the animated video, he grows older, and a storm darkens the sky. He pauses in front of a building labeled "Ministry of Prisoners and Missing" in both English and Hebrew, with the Israeli state seal.

He disappears over the horizon and the screen fades to black, with writing in Hebrew and Arabic that says, "Finally ... the efforts of the Israeli government succeed, after the prisoners exchange deal, and Noam meets his son Gilad."

The video shows a prisoner entering Gaza holding a victory sign. But Noam Shalit encounters a casket draped in an Israeli flag.

He is seen awakening from that dream, sitting in front of the prime minister's office. The camera zooms in on Gilad Shalit's photo, then fades to black, with the message, "There is still hope."

However, the video drew harsh reaction from Israel, as well as from Noam Shalit.

"It's better if Hamas leaders would focus less on video presentations and would be more concerned about the interests of their prisoners and the public in Gaza," the elder Shalit told the popular Israeli news website Ynet.

Last week, the young daughter of Faithi Hamad, Hamas interior minister, was transferred to Jordan for an urgent operation. The girl left Gaza with her mother and received initial medical care at a medical center in Ashkelon, Israel, before being flown to Amman.

Netanyahu spokesman Nir Hefez referenced that in his reaction to the video Sunday.

"The Hamas leadership's cynical use of the Shalit family's sensitivities two days after Israel allowed a little girl to be flown for life-saving surgery outside Gaza attests more than anything to the character of this terrorist organization," Hefez said.

The Palestinian Ma'an news agency had reported that Hamas' military wing, the al-Qassam Brigades, would release a message Sunday, and that it was expected to "provide a response to Israeli Prime Minister Benjamin Netanyahu's most recent demand to release Shalit unconditionally, resulting in an easing of the Israeli imposed siege on Gaza.

"The announcement follows reports of French mediation to break the stalemate reached on swap talks between Israel and Shalit's captors."

The al-Qassam Brigades said in a statement the previous mediator "would have come close to finalizing the deal 'had the Israeli government not been so stubborn,' " Ma'an reported. Egyptian efforts in a prisoner swap deal were thwarted because Israel refused to release 1,000 Palestinian prisoners and other long-serving prisoners, the al-Qassam said, according to Ma'an.

However, Hefez said Sunday that "for months, the Hamas leaders have avoided responding to the proposals for a humanitarian deal, which was tabled by the [previous] mediator, under Egyptian aegis. This proposal, which was formulated vis-a-vis both sides, would bring about the immediate return of Gilad Shalit, safe and sound to his family and his people."