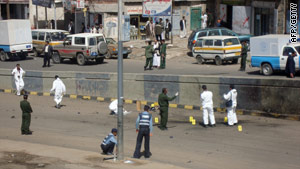 Officers inspect the scene of a bomb attack Monday on the British ambassador to Yemen.

(CNN) -- The British ambassador to Yemen survived an apparent suicide bomb attack Monday on his convoy in the capital, Sanaa, the British government and Yemen Embassy in Washington said.

"There was (a) small explosion beside the British ambassador's car. He was unhurt. No other embassy staff or British nationals were injured," said a statement by the British Foreign and Commonwealth Office.

In a separate statement, the spokesman for Yemen's U.S. Embassy, Mohammed al-Basha, said the lone fatality of the morning attack was the alleged suicide bomber, described as a man dressed in sports gear with explosives strapped to his body.

Initial reports said two Yemenis -- a man and a woman -- were injured in the attack and taken to a hospital, but a Yemeni government official said three bystanders were rushed to the hospital.

The official asked not to be identified because he is not authorized to speak to the news media. government or the Yemeni Embassy.

There was no confirmation of those reported injuries in the statements from the British government or the Yemeni Embassy.

The convoy carrying Ambassador Tim Torlot, 52, was a short distance from the British Embassy at the time of the blast. Yemeni security forces sealed off the area and began an investigation.

Torlot was appointed ambassador to Yemen in July 2007.

"The embassy will remain closed to the public for the time being," the Foreign Office said. "We advise all British nationals in Yemen to keep a low profile and remain vigilant. We are working urgently with the Yemeni authorities to investigate what happened."

Al-Basha's statement said the attack occurred at 8 a.m. in Noqom in the eastern district of Sanaa.

The statement noted Yemeni security forces killed two suspected al Qaeda operatives and arrested a third in the western coastal city of Hodeidah on April 18, and said the government has increased security measures around vital installations and foreign missions for fear of retaliation.