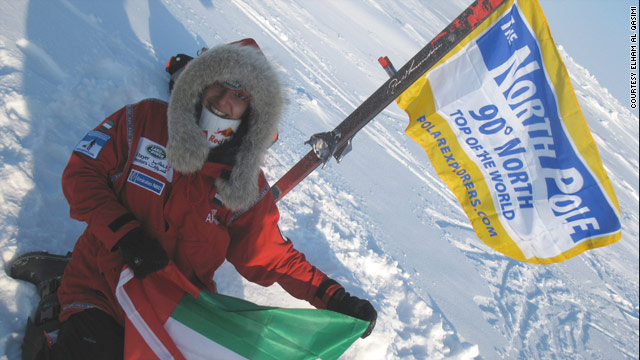 London, England (CNN) -- A woman from the United Arab Emirates was literally on top of the world after becoming the first Arab female to reach the North Pole.

Elham Al Qasimi braved temperatures of minus 22 F (minus 30 C) and coped with frostbite to fulfill a lifelong ambition by making the Arctic journey.

"I wanted to stand on top of the world and I wanted to put myself into the diametrically opposite environment to what I had ever experienced in my life," Qasimi told CNN.

Upon reaching her destination, Qasimi scattered a handful of sand she had brought from her home country.

Qasimi began her journey on April 16 at precisely 89 degrees latitude, setting off from a temporary Russian base set up on drifting ice in the Arctic Ocean.

She then skied 80 miles with a 41-kilogram sled in tow, and finished her expedition on April 23 at 90 degrees North -- the geographic North Pole.

Qasimi and her team of two guides and three other trekkers carried all their own food and equipment. Qasimi dealt with a minor case of frostbite on her nose and frostnip in her fingers.

"You're facing one of the harshest environments in nature," Qasimi told CNN.

Before the trip she underwent an intensive six-month training regime, including a stint in the French Alps, where she kept a video diary for CNN. But the merciless reality of polar trekking still came as a shock.

"You are too cold to feel your fingers. If you can't feel your fingers you don't want to take them out of the mitts in order to pour some food out or drink some water, but you're burning so many calories that if you don't, you will collapse."

More from Inside the Middle East: Beirut festival puts young writers on the world map

My joints were hurting from the constant grinding -- eight hours a day with barely any breaks.
--Elham Al Qasimi
RELATED TOPICS

During her expedition Qasimi kept an Internet journal of her experiences.

In it, she described the sight of ice blocks jutting out from the snow like "blue kryptonite," seeing "sundogs" -- an optical illusion "somewhere between the northern lights and a rainbow" -- and crossing "floaties, which are loose but large pieces of ice that sink into the ocean if you stand on them too long."

Mental toughness was just as important as physical endurance, according to Qasimi.

She told CNN: "My legs, arms and back held up fine. My joints were hurting from the constant grinding -- eight hours a day with barely any breaks -- but the mental challenge was the most important part of it."

When morale was low Qasimi read letters from loved ones to give her strength, she said.

The support of members of the public -- particularly Middle Eastern women who often said her story had inspired them to try to fulfil long-held ambitions -- also helped her push on.

"Prior to my departure I got really inspiring messages from women throughout the Middle East -- from Saudi, Syria, Morocco ... There were a whole lot of people who wanted to see me make it, so it wasn't just personal anymore," she said.

Qasimi, a former investment banker who was born in Dubai but lived in the Unites States until she was 12, is believed to be the first Arab woman to set foot on the North Pole.

Qasimi wasn't aware of this when she started planning her journey, but it became very important once she realized.

"Universities and all these things are important but they're not what makes a productive society, per se. It's people with opinions, with viewpoints, preferences and experience.

"Women in the Middle East need a bit more of that, whether it's in fashion, art or sport. That was the most important message for me, that made it worth sharing."