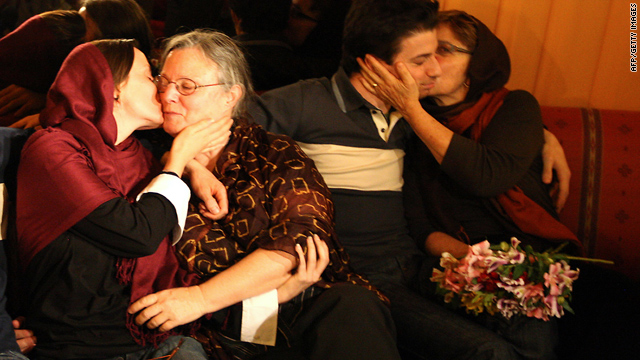 Was there an Iranian prisoner exchange?
STORY HIGHLIGHTS

Baghdad, Iraq (CNN) -- Two Iranians detained for years in Iraq by U.S. troops have been freed and are headed home, officials at the Iranian Embassy in Baghdad told CNN on Friday.

The release comes as the mothers of three imprisoned American hikers visit their incarcerated children in Iran. The mothers have been imploring the Iranian regime to release them.

But Iranian officials said the release of the two in Iraq has no connection to the status of the three hikers.

Ahmed Barazandeh was arrested six years ago by U.S. troops in the Iraqi city of Samarra. He had been traveling from Najaf to Samarra on a religious pilgrimage and was detained after he separated from his group.

The second man -- identified by officials at Iran's Baghdad Embassy as Abdullah Maleki and by Iran's Press TV as Ali Abdulmalek -- was arrested by U.S. troops more than two years ago because he was not carrying a passport when he entered Iraq.

Hassan Kazemi Qomi, Iran's ambassador to Iraq, is quoted by Press TV as saying the abductees were arrested on "baseless charges and (for) not carrying passports." The ambassador said both men were on a pilgrimage to Iraqi holy cities when they were seized.

The Iraqi government secured their release from a prison controlled by U.S. forces within the framework of a security agreement signed between Baghdad and Washington in 2008.

The move could be significant because Iranian President Mahmoud Ahmadinejad publicly called for a swap when asked in a newspaper interview in May about the possible release of the hikers.

Last week, a French woman arrested in Iran on espionage charges was released and an Iranian who had been in a French prison for 19 years was freed. But it is not known whether that was a swap.