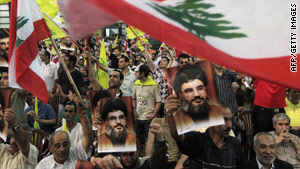 According to the National News Agency of Lebanon, the army opened fire after Israeli planes entered Lebanese airspace for a third time over a two-hour period in what would be a violation of U.N. Security Council Resolution 1701.

"The Israel Defense Forces does not comment on Israeli Air Force activity or rumors regarding it," an IDF spokeswoman said.

Airspace violations by Israel have been reported since a cease fire was established following five weeks of fighting between Israel and Hezbollah in the summer of 2006. The Israeli military attacked after Lebanese-based Hezbollah militants kidnapped two Israeli soldiers during a cross-border raid.

Under Resolution 1701, Israel is not supposed to conduct military operations over or in Lebanon. Israel has accused Hezbollah of smuggling arms into southern Lebanon, also in violation of the resolution.