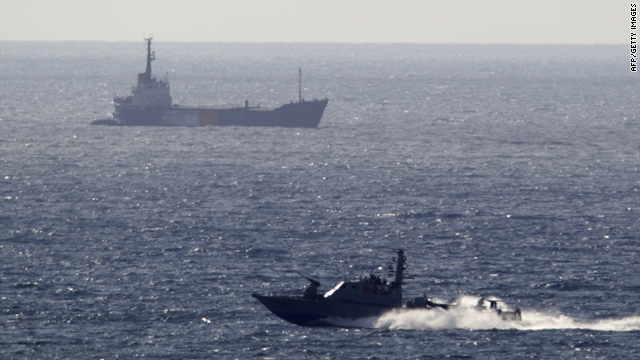 An Israeli navy boat escorts the Rachel Corrie aid ship, back, as it enters the Israeli military port of Ashdod on Saturday.
STORY HIGHLIGHTS
RELATED TOPICS

Jerusalem (CNN) -- The Israeli government's press division is apologizing for circulating a link to a video that mocks activists aboard a ship headed to Gaza earlier this week that was blocked by an Israeli raid.

"Due to a misunderstanding on our part, earlier (Friday) we inadvertently issued a video link that had been sent for our perusal," according to a statement from Israel's Government Press Office, which distributed the link to media outlets.

"It was not intended for general release," the statement said. "The contents of the video in no way represent the official policy of either the Government Press Office or of the State of Israel."

The video, titled "We Con the World" -- set to the tune of the 1985 hit, "We are the World"-- was put together by Caroline Glick, a former member of the Israel Defense Forces and columnist for the Jerusalem Post.

In the video, up to a dozen members of the so-called "Flotilla Choir" -- some wearing a variation of traditional Arab dress -- sing satirical verses, such as: "There's no people dying, so the best that we can do is create the biggest bluff of all."

On her blog, Glick, who briefly appears in the video, says, "We produced a clip in English. There we feature the Turkish-Hamas 'love boat' captain, crew and passengers in a musical explanation of how they con the world."

"We think this is an important Israeli contribution to the discussion of recent events and we hope you distribute it far and wide," she adds.

Nine Turkish citizens were killed Monday after violence erupted on one of six ships in a flotilla carrying humanitarian aid to the Palestinian Gaza Strip. A number of other people were wounded. Israel said the passengers initiated the attack; the passengers blamed the troops.

That incident drew widespread condemnation and cast a spotlight on the dynamics of the Gaza crisis. On Saturday, Israel intercepted the final boat that was part of the flotilla, though the incident aboard the Irish-owned MV Rachel Corrie ended peacefully about 22 miles off the Gaza coast.

Israeli government spokesman Mark Regev dismissed the the video link, saying, "The GPO sends out lots of articles. It doesn't mean they like it."

Regev said he first noticed the video on the New York Times website.

"I called my kids in to watch it because I thought it was funny," he said. "It is what Israelis feel. But the government has nothing to do with it. The GPO distributes non-government items, things that we think that show our side of the story."

It was not the first time the Israeli GPO stirred controversy with its public communications on the Gaza flotilla.

Prior to the storming of the Turkish ship, the GPO sent an e-mail to journalists sarcastically recommending that while covering "alleged humanitarian difficulties," journalists should dine at one of Gaza's few restaurants.

"We have been told the beef stroganoff and cream of spinach soup are highly recommended," the e-mail said.

The message included an internet link to an old promotional video for the restaurant. The e-mail drew criticism from the foreign press and pro-Palestinian activists.

In an interview with the Jerusalem Post, GPO director Danny Seaman defended the communication, arguing that foreign media coverage of Gaza was not balanced.