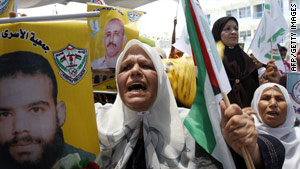 Women in Gaza hold pictures of Palestinian men held in Israeli jails during a protest in Gaza on Sunday.
STORY HIGHLIGHTS
RELATED TOPICS

(CNN) -- A report released Monday by the International Committee of the Red Cross is calling on Israel to lift a 3-year-old blockade against Gaza, saying "the closure is having a devastating impact on the 1.5 million people" who live in the Palestinian territory.

The blockade was first imposed in 2007 after the militant group Hamas seized control of Gaza. It is designed to stop the smuggling of arms into the territory, the Israeli government says.

Humanitarian aid is allowed into Gaza despite the blockade, but the ICRC says it is not enough.

"Gazans continue to suffer from unemployment, poverty and warfare, while the quality of Gaza's health care system has reached an all-time low," the report says.

It specifically cites hardships faced by Gaza farmers whose land has been turned into battle zones, and fishermen who risk arrest by fishing in restricted waters.

"The whole of Gaza's civilian population is being punished for acts for which they bear no responsibility," the report says. "The closure therefore constitutes a collective punishment imposed in clear violation of Israel's obligations under international humanitarian law."

The report also describes an "acute electricity crisis" that leaves hospitals relying on generators amid daily blackouts, and a shortage of medical supplies that is putting patients' lives at risk.

"The state of the health-care system in Gaza has never been worse," Eileen Daly, the ICRC's health coordinator in the territory, is quoted as saying in the report. "Health is being politicized -- that is the main reason the system is failing. Unless something changes, things are only going to get even worse. Thousands of patients could go without treatment and the longterm outlook will be increasingly worrisome."

The report comes just two weeks after an Israeli raid on a flotilla bringing humanitarian aid to Palestinians in Gaza. Israeli commandos intercepted the flotilla at sea May 31 and stormed the largest vessel, the Turkish-flagged Mavi Marmara. At least nine people aboard the ship were killed.

The incident "once again puts the spotlight on the acute hardship faced by the population in the Gaza Strip," the ICRC report says.