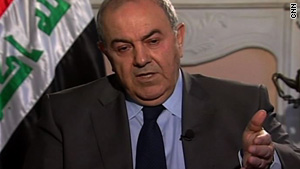 Allawi says the departure of American troops would cause a further deterioration of security in Iraq.
STORY HIGHLIGHTS
RELATED TOPICS

(CNN) -- Former Iraqi Prime Minister Ayad Allawi said in an interview with CNN that Iraq is powerless to respond to foreign military strikes, such as those by Turkey and Iran, because Iraq has no army, no air force, and no clear foreign policy.

Allawi said there is a political vacuum in Iraq and that it is important to expedite the formation of a new government. But, he said, "I think we are still far away from this."

The Turkish military said this week it sent three commando divisions and a special forces brigade two or three kilometers into Iraqi territory in pursuit of Kurdish rebels. The Turkish Foreign Ministry said Thursday that troops have now completely withdrawn.

Neighboring Iran has staged a series of military strikes against Iraq's Kurds, targeting rebels it says are attacking Iran. When asked about Iran's recent bombings of the town of Ali Rash, near the Iran-Iraq border, Allawi suggested holding negotiations with Tehran "to try to find a solution to the problem."

While clashes continue in Iraq's autonomous Kurdish region in the north, lawmakers are battling for power farther south, in Baghdad. Allawi's Iraqiya political bloc won 91 seats in the March 7 elections, two seats more than the State of Law coalition led by current Prime Minister Nuri al-Maliki. There has been political deadlock ever since, with both blocs claiming the right to form the new government.

When asked why he did not step aside to break the political stalemate, Allawi responded: "The issue is much more complex than this. It is very unfortunate that people are trying to simplify things."

Meanwhile, the U.S. combat mission in Iraq is scheduled to end Aug. 31. Allawi told CNN that the departure of American troops would cause a further deterioration of security in Iraq.

Allawi said that Iraq "needs a lot of support to get out of this bottleneck and to secure its borders, to secure its stability, and to form a government."

Allawi led the interim Iraqi government set up in 2004, after the U.S. invasion that forced longtime strongman Saddam Hussein from power. Allawi is a member of Iraq's Shiite Muslim majority, but leads a secular bloc that includes Sunni Arab politicians.

Iraq's new parliament was officially sworn in this week, meeting for just 20 minutes before suspending their session to continue haggling over who should form the government. Al-Maliki's State of Law coalition recently merged with another bloc of Shiite Muslim parties to form a 159-seat coalition, but that's still less than a majority of the 325-seat parliament. That means a 43-seat alliance of Kurdish parties could play a role as kingmaker.