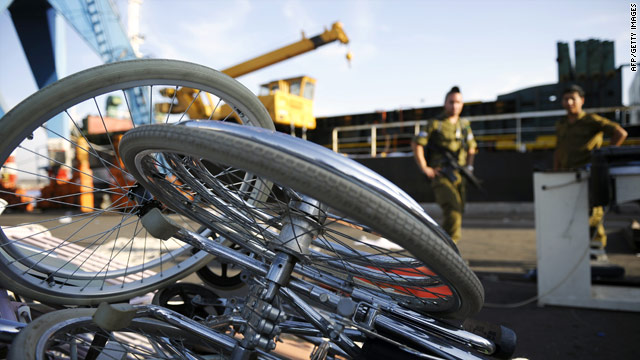 Jerusalem (CNN) -- Israel is relaxing its blockade of Gaza, its Security Cabinet announced Thursday after widespread international criticism of its raid on a ship trying to break the barricade last month.

It will "liberalize the system by which civilian goods enter Gaza," while keeping in place "existing security procedures to prevent the inflow of weapons," the security cabinet said in a statement.

Israeli commandos boarded a flotilla of ships trying to break the blockade on May 31, killing nine people on one of the ships.

Israel says its troops were attacked with knives, metal poles and other objects.

"The intention is to allow more products to enter, but always after an Israeli check that will determine that no weapons or materials that can aid combat will get through," he said.

"All this will happen without lifting the naval blockade which is there to make sure that rockets, missiles and other weaponry do not enter Gaza," Barak said.

"We are looking into the possibility of allowing projects that are being carried out under the supervision of international bodies," he said.

Many buildings in Gaza were damaged in Israel's "Cast Lead" incursion in late 2008 and early 2009, and have not been repaired because of the Israeli controls on importing construction materials.

Israel says it must control what goes into Gaza to keep militants in the Palestinian territory from launching attacks into Israel.

Barak also warned Lebanon that Israel would hold it responsible for ships leaving from its ports for Gaza.

"The Lebanese government, from whose ports these ships are leaving, is responsible for preventing the loading of arms, ammunition, explosives, etc. ...that can lead to a violent and dangerous confrontation if the ship refuses to go to Ashdod," the Israeli port that accepts international goods destined for Gaza, Barak said.

Iran has also said it is sending a flotilla of aid to Gaza.

Prime Minister Ismail Haniyeh said the Hamas government rejects Israel's easing of the siege, insisting that it be lifted completely.

Saeb Erekat, the chief Palestinian negotiator and advisor to Palestinian Authority President Mahmoud Abbas said the move was not enough.

"We believe this Israeli decision is not sufficient and we call upon Israel to totally lift the siege. Either we have a siege or we don't," he said.

"The fact is the siege continues on 1.5 million people.... We believe this siege must be totally lifted," he said.

"This is just aesthetics for the Israeli occupation," said Jamal al Khoudary, an independent member of the Palestinian parliament. "They are running away from international pressure."

U.N. Secretary-General Ban Ki-moon said he is "encouraged" that Israel is reviewing its Gaza policy and is hopeful that the move is "a real step towards meeting needs in Gaza."

Chris Gunness, a spokesman from United Nations Relief and Works Agency, said, "We need to see deeds not words. The United Nations has always said the blockade needs to be lifted. The collective punishment on 1.5 million people is illegal and has to be ended, that ends with the lifting of the blockade."

CNN's Michal Zippori and Paula Hancocks contributed to this report.