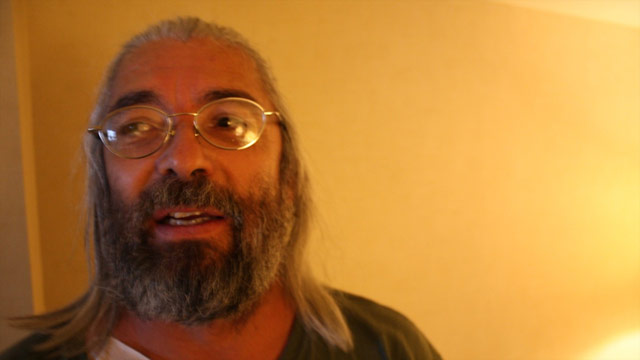 Los Angeles, California (CNN) -- An American man detained last week in Pakistan while on a hunt for Osama bin Laden arrived back in the United States Wednesday afternoon and promptly proclaimed, "We gotta protect our own!"

Gary Faulkner arrived in Los Angeles on a flight from Dubai, after being released in Pakistan without charge.

While heading to a car with family members he made brief, rambling remarks to reporters.

The 50-year-old Faulker, bearded and with his long, grey hair drawn in a ponytail, was wearing sandals, a long olive-drab shirt and fatigue-style pants. He brushed aside questions about whether he felt he ever got close to bin Laden.

Faulker, who has lived in Colorado for the past 40 years, was due to fly to Denver later. He spoke while heading to a hotel to spend some time with family members who flew in from Colorado to greet him.

Then while there, he denied in an interview with CNN that he had ever been detained, saying he was kept under wraps "for my protection."

"You can't just walk out on the street or something," he said.

Faulker said he has been to Pakistan seven times in his quest for bin Laden.

But he said it felt "fantastic to be back on our native soil. It's good."

Earlier, some of his family members spoke as he was being processed through Immigration and Customs.

"I'm happy that he's on American soil. I'm so excited. I'm elated that my boy is home safe," said Arlyne Faulker, his mother.

"We love our brother, and we're here to support him," added Todd Faulker, his brother. The two were at the airport along with a sister, Deanna Martin.

Pakistani police said Gary Faulkner was stopped near the border with Afganistan's Nuristan province on June 13, carrying a pistol, a sword, night-vision equipment. They said he told them that he was on personal mission to capture bin Laden, something he had been wanting to do since al Qaeda's September 11, 2001, attacks on New York and Washington.

He later was moved to Islamabad and questioned and a given medical exam, which determined that he needs dialysis for kidney disease every 20 days. A source close to the family later told CNN he was given dialysis in a Pakistani military hospital and was in good condition.

Another brother, Dr. Scott Faulker, told CNN that Gary Faulkner felt the U.S. government was not doing enough to bring bin Laden to justice. The U.S. State Department is offering a reward of up to $25 million in return for information leading to bin Laden's arrest.

A police chief in northern Pakistan, Mumtaz Ahmed, said Faulkner asserted he had no intention of killing bin Laden, but because of the weapons he was carrying, the police chief did not believe him.

A Pakistani doctor who examined Faulker also determined he has psychological problems, according to a senior Pakistani intelligence official. The official was not identified because he is not authorized to speak to the media.

But his brother disputed that Gary Faulkner has mental problems. "My brother is not crazy. He is highly intelligent and loves his country, and he has not forgotten what Osama has done to this country," Scott Faulkner told CNN.