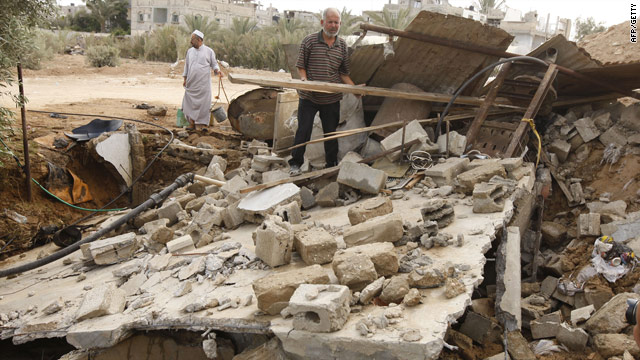 Palestinians inspect the aftermath of an Israeli airstrike on Rafah in Gaza. The Israeli military said the attack was in response to mortars fired into Israel.
STORY HIGHLIGHTS

Jerusalem (CNN) -- A Palestinian was killed after Israel bombed two tunnels in the south of Gaza, Palestinian medical officials said on Friday.

Israel -- which also bombed a weapons storage facility in northern Gaza -- said its strike was in response to mortars that were fired into Israel and hit a government building in the southern district.

A search is going on for another Palestinian thought to be in the rubble.

"The IDF holds Hamas solely responsible for terror emanating from the Gaza Strip," the statement said.