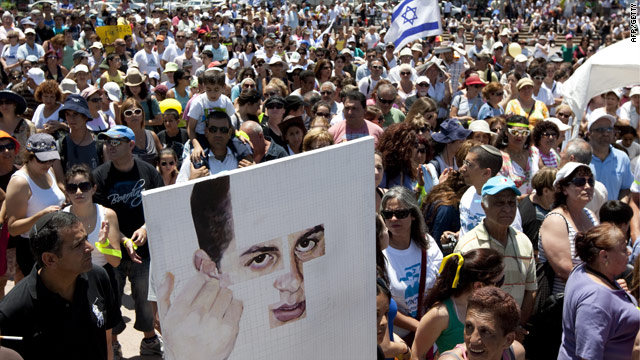 Jerusalem (CNN) -- The father of Gilad Shalit on Friday resumed calls on Israel's Prime Minister Benjamin Netanyahu to help get the soldier freed.

The soldier's father, Noam Shalit, said: "I call on the prime minister, listen to the people. Get the strength from them to make this difficult decision before it is too late."

Noam Shalit spoke to CNN by phone while participating in a march for his son's release.

Gilad Shalit's family is on a planned 12-day march from their home to Jerusalem. Thousands of people have joined the march. The family intends to camp outside Netanyahu's official residence until Shalit is free.

Shalit has been held captive since June 25, 2006, when Palestinian militants from Gaza, including Hamas, captured him. The militants tunneled into Israel and attacked an Israeli army outpost near the Gaza-Israel-Egypt border, killing two soldiers in the assault. Israel immediately launched a military incursion into Gaza to rescue Shalit, then age 19, but failed to free him.

Netanyahu said Thursday that he would consider the terms of a prisoner swap with the Palestinian militant group Hamas "while resolutely safeguarding the citizens of Israel."

"As prime minister, I must weigh all these considerations," Netanyahu said at a news conference. "Acting rashly, acting without discretion, we could repeat the mistakes of the past and bring upon ourselves a very, very great danger."

"The state of Israel is willing to pay a very high price," he said. "But it cannot say any price."

"It is time that he understands what the people want," Noam Shalit said. "Tens of thousands of citizens marching with us to Jerusalem are aware of the price that is required to free Gilad, but they also know the price of abandoning him."