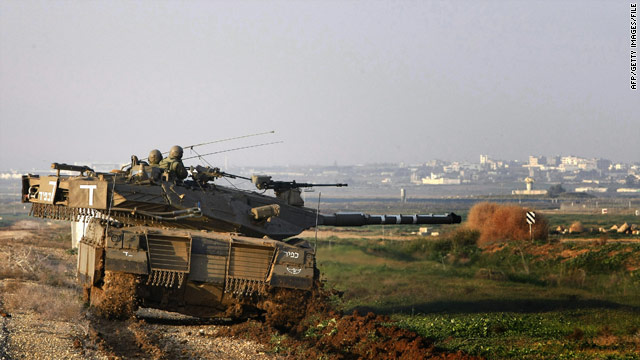 An Israeli tank near the Israel-Gaza border during Operation Cast Lead, undertaken by Israel in late 2008.
STORY HIGHLIGHTS
RELATED TOPICS

Jerusalem (CNN) -- An Israeli soldier faces a manslaughter charge in the death of a Palestinian waving a white flag during a three-week incursion into Gaza, the Israeli military said Tuesday.

The criminal indictment is one of three legal actions taken by the Israeli military for incidents that occurred during Operation Cast Lead. More than 1,100 Palestinians died during the operation, which began late in 2008 and ended early in 2009. It was intended to halt the firing of missiles from Gaza into Israel.

The manslaughter charge was filed after an investigation into the shooting, the Israel Defense Forces said in a news release.

"This decision is based on evidence that the soldier, who was serving as a designated marksman, deliberately targeted an individual walking with a group of people waving a white flag without being ordered or authorized to do so," the IDF said.

In another incident, a battalion commander authorized sending a Palestinian man into a house sheltering terrorists next to his own house in order to persuade them to leave, the news release said. The commander was indicted "because he deviated from authorized and appropriate IDF behavior" and ignored rules on the use of civilians in military operations, it said.

But the release did not appear to say what charges he faces, and the IDF did not immediately respond to an e-mail seeking clarification.

Tuesday's news release also said a criminal investigation has been ordered into an incident in which a residence holding about 100 members of a family was struck from the air.

In a separate case, an investigation into an assertion that the Ibrahim Al-Makadma mosque had been attacked concluded that that did not happen, but that an aerial strike near the mosque had occurred.

"The aerial strike targeted a terror operative involved in the launching of rockets toward Israel who was standing outside of the mosque," the news release said. "Injuries caused to civilians inside were unintentional and caused by shrapnel that penetrated the mosque."

But the investigation concluded that the officer who ordered the attack had "failed to exercise appropriate judgment" and, as a result, will not be allowed to serve in similar positions of command.

Legal measures were deemed unnecessary, however. "The military advocate general decided that the attack did not violate international laws of warfare because the attack did not target the mosque, rather it targeted a terror operative, and when the attack was authorized, no possibility of harming civilians was identified," it said.

Earlier this year, the Israeli military disciplined two officers -- a brigadier general and a colonel -- for allowing artillery shells to be fired into a populated area of Gaza.

"I think Israel should take all responsibility for all the war crimes that it is responsible for during its unjustified war in Gaza, and what they just announced is too little too late," Palestinian spokesman Ghassan Khatib told CNN.

The IDF news release said that Israel carried out the operation after enduring eight years of rocket attacks from Gaza. Israel, it said, had "practiced a policy of restraint for a long period of time."

It accused the Palestinian movement Hamas of terrorizing the population and said the crowded urban centers of Gaza created a complex security situation.

More than 1,400 Palestinians died in Israel's incursion, according to officials in Gaza. The Israeli military said 1,166 people were killed, 60 percent of whom were "terror operatives."

The 575-page Goldstone report -- approved by the U.N. Council for Human Rights in 2009 -- accused both Israel and Hamas of "actions amounting to war crimes, possibly crimes against humanity" during the three-week offensive that ended in January 2009.

The report, known for its author, South African jurist Richard Goldstone, called on both Israel and Hamas to independently investigate the alleged human rights violations cited in the report.